That Was The Show That Was: Perfect Pussy, Joanna Gruesome, Potty Mouth and Love Of Everything | The Sinclair, Cambridge | 27 Aug. 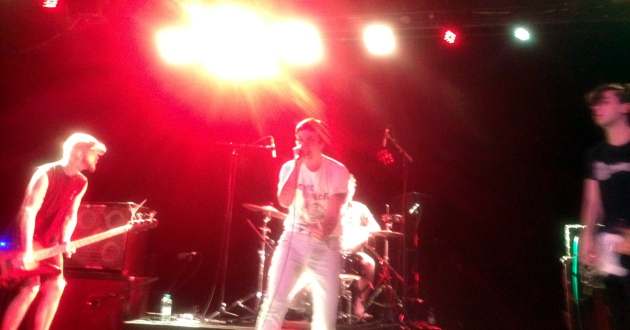 There was a moment very early into Welsh noise-pop quintet Joanna Gruesome's headlining set at The Sinclair Wednesday that emphasized just how important its collective voice is, separate and apart from band's music. Fronter Alanna McArdle, sensing senseless aggression from a certain subset of overzealous concertgoers, stood at the lip of the stage and figuratively shot venom out of her eyes through the extended outro of set opener "Secret Surprise" as she slowly shook her head in disgust [shades of Mackaye in '94, we dare say -- Ed.]. Message received -- by most. By show's end, spurred at least in part by one woman's trip to the hospital, McArdle had again addressed the ever-shrinking pit, this time demanding the bad actors' swift exit from the venue, and to the cheers of nearly everyone in the audience, they solemnly obliged. Good guys win. Three cheers.

Between those moments of punk rock social engineering transpired an extremely impressive set that delivered would-be hit after should-be hit from Joanna Gruesome's boundlessly vital Slumberland debut Weird Sister [review]. While the world awaits a new collection of what will likely be equally exciting noise-pop, the Gruesomes plays the short game, releasing a winning series of split singles, including -- most crucially -- 7" records with fellow fuzz traffickers Trust Fund and present tourmates Perfect Pussy. We were treated Wednesday to the Welsh unit's sides of both singles, including an utterly gorgeous take on "Jerome (Liar)" from the Trust Fund release, a tune that makes a strong case for the argument that Joanna Gruesome has far larger things ahead of them. Following McArdle's call-out near the end of its set, the band ripped through a totally lethal rendition of its undeniable sonic calling card "Sugarcrush," pushing the tune's raging undercurrent into a swell of all-encompassing noise as McArdle coldly stormed offstage well before the beat dropped out. We couldn't help but feel like Boston let the band down big-time.

Prior to that legendary exhibition of noisy prowess, current champions of unadulterated distortion Perfect Pussy unleashed a powerful, sub-30 minute cathartic release of sonic energy. The band didn't really play all that many "songs" -- the bit of music rendered closest to its recorded counterpart was the drifting, confessional "Interference Fits" -- instead choosing to run everything into the ground in two-to-three-minute shifts punctuated by short tuning breaks and occasional thanks from fronter Meredith Graves. It goes without saying that we were stunned at what we believe was Perfect Pussy's first show in Boston at Tufts University last year prior to the release of its Captured Tracks debut Say Yes To Love [review], but Wednesday's performance stands head and shoulders above. Delivering tenfold on every captivating element of Love, Perfect Pussy are a transcendent act whose conviction and commitment to complete aural immolation make its music literally awesome to behold.

Western MA garage-punk standouts Potty Mouth performed second on the bill, with new guitar player Ali Donohue from Fleabite in tow, and proffered an array of as-yet-unreleased tunes. Readers will recall we delivered a positive assessment of Potty Mouth's still-rad debut Hell Bent via Vanyaland last year, but the act's newer jams are poised to substantially raise its game. Largely doing away with the brittle, surfy lead guitar lines scattered across Hell Bent in favor of a increased heft and melodic chug, the songs practically beg for Justin Pizzoferratto's production, which we're given to understand is Potty Mouth's next move, and a smart one at that. Chicago-based one-man-band Love Of Everything -- or for those in the know, Bobby Burg of Joan Of Arc fame -- opened the night mixing live guitar, bass, and synth loops with found percussion and camera flashes, among many other things. His songs are pure jangle-pop beauty, and Mr. Burg's live show is a horse of a different color, entirely, and commenced a near-perfect night of music quite nicely. -- Dillon Riley