Show Us Yours 21: The Cherry Wave 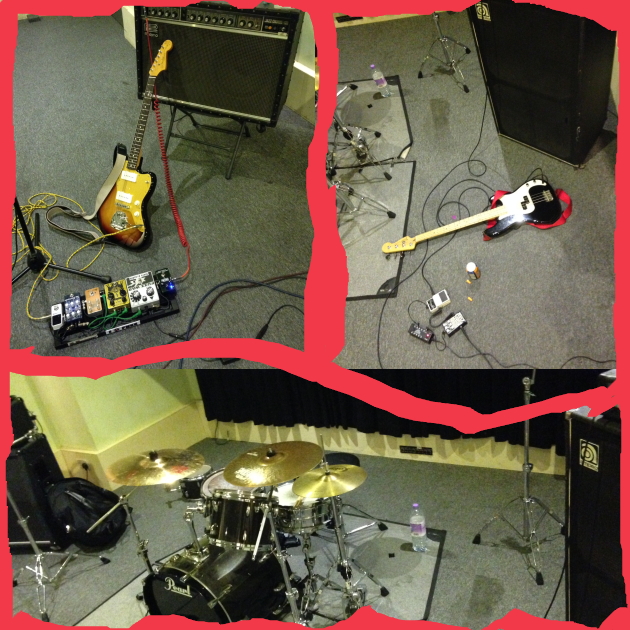 We're not sure whether it is a surprise or not, that the brain-scraping, ear-bleeding shoegaze of Glaswegian quartet The Cherry Wave is made in a muted, sterile-looking (but apparently not -smelling) grey-and-beige rehearsal space. We were picturing something charred and dank, but given the searing volume the Scottish act characteristically weilds, a burned-clean look perhaps isn't to be unexpected. The band played its first live show two years ago and caught our attention not long after. Since then The Cherry Wave has released a self-titled (and now unavailable) demo EP, a titanic second EP titled Blush and a feedback-laden cut for a compilation, all of which firmly established the foursome as one to watch. The act is nearing completion of its debut full-length, a set that appears poised to both intensify and expand on The Cherry Wave's uncompromising sound. Indeed, the collection apparently closes with a nine-minute epic titled "Fuzzthrower," and is in the final stages of mixing. With the debut LP set to drop (perhaps very soon) and recent and approaching live dates with The Telescopes and Ringo Deathstarr in its datebook, we thought it was high time to check in with The Cherry Wave to learn a bit more about where and how (but mostly where, as the purpose of our Show Us Yours features is to peek into the practice spaces of our favorite bands) it crafts its beautiful tidal wave of sound. Fronter and guitarist Paul Owens was gracious enough to answer some questions for us, which we present below. Read on, and if you haven't yet availed yourself of the opportunity, be certain to click on the Bandcamp embeds at the foot of the piece to get indoctrinated so that you're ready once Cherry Wave's LP hits. We expect it to hit quite hard.

Clicky Clicky: So why do you use this practice space?

Paul Owens: It's cheap and nearby. The gear there's decent and the rooms are pretty spacious, which is nice. You don't want to be stuck in a tiny cupboard when you have 6 fuzzes on.

CC: Is there an idiosyncrasy or quirk to the space that has affected the sound of one of your songs, or even the overall (deafening) sound of The Cherry Wave?

PO: We've recorded a couple of times in the room -- our first EP and "Under Dull Grey Skies" were both recorded in it -- but generally it's just a place where we can rehearse loud, nothing particularly quirky about it.

CC: You walk into your space. What's the first thing you smell?

PO: The previous band's sweat, which is (as we say in Scotland) minging.

CC: As a guy who accesses contemporary Scottish indie rock solely and selectively through the Internet, I feel unqualified to say this, given what seems like an incomplete view of "the scene," as it were. But even so, there seem to be certain identifiable traits to Scottish indie rock, such as a willingness to embrace noise (and inflict it on listeners), and a certain cutting sense of humor, going at least as far back as Jesus And Mary Chain. As an actual Scotsman, do you feel like this is accurate? Are there representative characteristics of Scottish indie rock that are impossible for an American living in America to perceive via a laptop? There must be, yeah?

PO: I'd say we're probably just the same as any other country: we have a varied musical expression, an absolute ton of atrocious crappy bands that could be from anywhere, and a few decent bands who could also be from anywhere. Maybe an identifiable trait of Scottish bands and musicians is that we generally tend to be politically on the left, but I'm sure that's maybe also the case with artistic communities the world over.

CC: As long-time fans, we're very excited about your full-length debut. We saw that you finished tracking in late spring, that the album was being mixed, that Nick Blinko will do the art and James Plotkin will master. What's left to do? Is there anything about the record will surprise fans of your earlier EPs? Any luck finding a label?

PO: We've not put much effort into looking for a label, so no news on that front. I think there's maybe a few surprises on there, yeah. There's a bit more aggression and variety than we've been able to express on an EP. We're just finishing off the mixing, so hopefully it'll be out very, very soon.

CC: What does the second half of 2014 look like for the band? Grand touring plans? Heading to India to study meditation like the Beatles in '68?

PO: We're just taking things a step at a time, get the album out, then we'll see, but we're not looking to take over the world or make a load of money or sell a million records. We just want to make music we actually like.

CC: Cheers, Paul, thanks for being a part of the feature.

PO: Thanks for asking us! Really appreciate it.