Show Us Yours #8: Okay Paddy 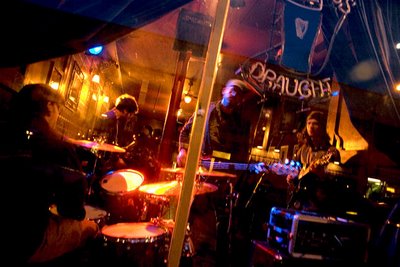 When we finally pulled Okay Paddy's first full-length The Cactus Has A Point out of our pile of submissions 14 months ago, it knocked our socks off. We reviewed it here. You can imagine our surprise when we learned that the quartet was based in Northeast Pennsylvania, Scranton to be exact, a town we used to wave to from the highway a couple times a year when traveling for holidays. We didn't consider the city any sort of hotbed of rock until we became more familiar with the other releases on Prison Jazz, which put out Cactus. Anyway, when we heard that Okay Paddy was about to release a new EP produced by Nick Krill of Spinto Band, we thought we'd check in with the band to see where they do what they do and what else they have in the works. Guitarist John Parise humored our questions, and our exchange is printed below, along with some forthcoming tour dates and some MP3S to download.

We practice at the bar Brian [Craig, Okay Paddy's drummer] owns called The Bog, located in beautiful downtown Scranton. The Bar features a stage and a good p.a. We're able to set up during the day and practice before the neons are turned on. 3/4ths of us work there.

2. Explain how an idiosyncracy or quirk of this space has affected a song.

An idiosyncrasy would be the pole located in the middle of the stage -- really annoying but as a load bearing beam we respect the work that it does.

3. You walk into your space. What's the first thing you smell?

4. We hear a fair amount of Pavement and Weezer in your records. Say Rivers Cuomo and Stephen Malkmus are the two finalists on a reality show of your devising. What would the task be to determine the winner between the two, and who do you expect would prevail?

Something like a T-ball game in which everybody wins. We won't be watching the game.

5. What do the next six months look like for the band?

A new EP in the spring [Where You Went, to be released on Prison Jazz], possibly a split 7" with The Sw!ms and shows, shows, shows.