Show Us Yours #6: Assembly Now 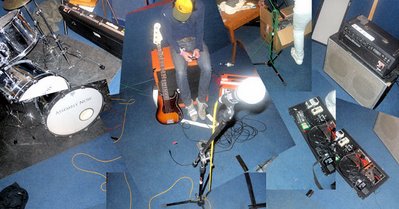 London-based Assembly Now, which charmingly and self-deprecatingly refers to itself as Ass Now, has burst out of the rock 'n' roll gates with two air-tight singles, and it doesn't appear to be letting up any time soon (get a load of the details in the answer to question five below). The two-year-old quartet's small catalog recalls early, sparer Bloc Party, but Assembly Now's music carries a frenetic pop undertone that gives it a singular flavor.

Enamored with the propulsive melodicism and the curious mention of rollerskating in the band's debut single "It's Magnetic" b/w "Out On 24s," we got in touch with the band to see if it would submit to our usual battery of "what's going on" and "what's your practice space like" questions. And we're happy to report that the band, or at least drummer Andrew "Lush" Lusher, obliged, and in doing so provided us with the artiest practice space picture we've received from a band to date for our Show Us Yours features (early visitors to the band's new bulletin board have already seen part of it). The band has no current plans to visit the U.S. at the moment, so unless you live in the UK or are planning on visiting soon (see all their current bookings here), this is as close as you're going to get. Get comfy. So about that practice space...

It's located in Deptford, which is basically the ghetto of London. Every day there's some sort of police chase or gang bust-up, so naturally it's the cheapest place to practice because no one wants to go there. However, we haven't figured out yet if saving money is worth getting knifed by a screaming homeless guy reeking of piss and crack. We also have a profound attachment to 'The Starry Night' by Van Gogh, and we wanted a rehearsal space that emulated those hypnotic shades of blue.

2. Explain how an idiosyncracy or quirk of this space or a former practice space has affected a song (or even your overall sound).

The walls are covered in carpet, so the room is completely dead-sounding. We occasionally enjoy creating tight sections of music with distinct spaces between notes, so the lack of natural reverb in the room probably has something to do with that. The vocal PA is also annoyingly quiet, so we've learned to control our volume at certain points which creates interesting dynamics in songs. We can't just have loud songs all the time because we'd never hear the singer.

In terms of actual writing and inspiration, we tend to write first in someone's bedroom with the lights down low and then bring those half-completed ideas into the rehearsal studio. Most of the songs we write from scratch in our little blue room tend to be extremely technical and self indulgent, which is fun for us to play but ultimately ends up sounding less like Don Caballero and more like Assembly Now Being Shit. There are exceptions though; "Calculate" was mostly written in the rehearsal space, you can hear that on our Myspace profile. We might have just got lucky with that one though.

Teenage man-sweat, stale smoke and carpet. Who knows why, perhaps it's just the way of things. Zen. The rehearsal room is both everything and nothing.

4. We see producer Howard Gray worked on one of your singles. Did he offer any anecdotes about his time working on The Cure's The Head On The Door sessions? Barring that, how did he affect the sound of "It's Magnetic"/"Out On 24s"?

Howard Gray is a recording studio wizard, a modern-day audio Gandalf. If something isn't working, he'll sit intently in the corner stroking his beard. After a few minutes he'll suddenly glide out of his chair and twiddle dials or move microphones and things magically come to life. He has loads of war stories about The Cure and U2 and all those bands, but he'd probably turn us into newts if we mentioned any of them in public.

We've just finished a handful of new songs with producer John Fortis, who has done records for everyone from The Prodigy to Art Brut to Razorlight, so we'll be releasing those on the Internet in a couple of weeks. We're doing a few dates on the VICE tour with The Noisettes and Goodbooks in March, John Kennedy has asked us to do an XFM session at the end of March, we've got our own headlining tour booked for April, a support tour with an amazing band called The Wombats in May/June and we'll definitely be doing a few UK festivals in summer. There's also been talk of doing another single or EP, we haven't decided what yet. Oh yeah, getting a record deal might be nice too. We're keeping busy.

How about a couple A-sides, courtesy of the Assembly Now site?