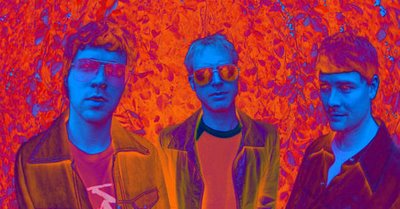 >> Word straight from Erik Evol of Philly power pop foursome The Get Quick is that the band's forthcoming sophomore set is titled See You In The Crossfire. The release will include the video for "Lose It All" we posted here a couple weeks back. Technical issues encountered getting the video on the disc pushed back its release to later in the spring, which in turn scotched The Get Quick's hopes of a big splash at the Rainbow Quartz South By Southwest showcase. No matter -- it sounds like the record is a real barn-burner. To quote Evol, its "a no-holds-barred buzzsaw rush of songs designed to melt your face off from the get-go." Longtime fans will be pleased to hear a revamped version of the old Mantaray numbers "Chemical Reaction" and the Beatles cover "She Said, She Said." Evol also promises that the old psych, avante and Bowie influences rear their heads. We're hoping to get an early listen to the set and we'll let you know just how badly you need it once we do. The Get Quick released its debut How The Story Goes on Rainbow Quartz in 2005.

>> Fields fans in search on an early taste of the band's new single "Charming The Flames," which streets this coming week as we noted here earlier, can hear the track via its new video posted here. We are digging the track's dense sound, although we wouldn't count it among the band's lyrical high points. And, like the video for "If You Fail We All Fail" that we wrote about here in November, the slick video comes off dull and superficial compared to the very fine clip produced for Fields' excellent track "Brittlesticks." The quintet will issue their debut long-player Everything Last Winter in the US May 8 via Atlantic.

>> Prime-time television lightning has struck twice for Joe Pernice's The Pernice Brothers. Tuesday night's episode of The Gilmore Girls will feature the band's "Conscience Clean (I Went To Spain)" According to Mrs. Clicky Clicky the episode features somebody or a couple somebodies going on a road trip. So the song seems appropriate. Although would "PCH One" be more appropriate? We guess we'll have to watch. Maybe.

>> More Cowbell tells us here that Wilco will stream for an unknown duration its forthcoming set Sky Blue Sky tonight at 10PM Central Time at Wilcoweb here. So if you don't have anything going on, there you go. Wilco's Nth album Sky Blue Sky will be released May 15 by Nonesuch.
Posted by Unknown at 3/03/2007 05:08:00 PM