Review: Ted Leo And The Pharmacists | Living With The Living 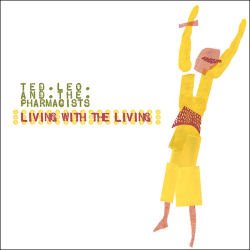 Ted Leo presents a problem for us that we don't like to admit: we've been horribly remiss in obtaining his recordings. Sure, we've acquired all the freely available tunes over the years as they've been doled out by Mr. Leo himself at his site and also at other blogs. And, yes, we've heard our share of Chisel. But until the promo of Leo's glorious forthcoming Touch And Go debut Living With The Living came over the threshold into Clicky Clicky HQ, we never possessed any of his full-length recordings. This is not for a lack of wanting -- we've just always assumed we'd get the records at a show or pick up used copies somewhere along the way. And it hasn't happened yet. Life has a funny way of getting in the way. We go to the penalty box, and we feel shame.

This is a long way of explaining that we feel ill-equipped to assess the merits of Living With The Living as an album relative to his others. But we can tell you what you will be confronted with when you drop the laser on your copy of the CD when you buy it (actually, you should buy it now, as folks pre-ordering the record are being given the bonus EP Mo' Living with their purchase -- details here). The set is produced by Fugazi drum beater Brendan Canty, but is decidedly less austere than the recordings of Mr. Canty's erstwhile band. Leo and Canty aren't afraid to deploy overdubs, acoustic guitar or glorious feedback for feedback's sake. The result is ample sonic variety that makes the 15-tune amalgamation of love songs ("Colleen," "A Bottle Of Buckie") and anti-war tirades ("Bomb.Repeat.Bomb," the Queen-ish song sketch "Annunciation Day/Born On Christmas Day," "Army Bound") remarkably satisfying.

Leo dexterously assimilates the '80s rock he is passionate about (we hope you've heard his recent cover of Springsteen's "Dancing In The Dark") with his post-punk past on Living With The Living. The set lightly sprawls across the two much in the same way The Clash's acclaimed London Calling captured and recast the Strummer and Jones' affection for trad rock, reggae and blues. Living With The Living highlight "La Costa Brava" melds Seven And The Ragged Tiger-era Duran Duran romanticism with the chart-friendly anthems of Combat Rock. "The Unwanted Things" captures Leo's re-imagining of the aforementioned Clash's "Revolution Rock," albeit with a smoother bass bounce where the Clash's tune bumps.

There is little that we'd refer to as filler and several tracks that we rate indispensable. Even the sound collage "Fourth World War" that opens the set is far from a throw-away, as it powerfully sets the stage for the driving anthem "Sons Of Cain" [MP3 below] while also setting the tone for the political aspects of the record. If we could change one thing, it's that we far prefer the demo version of "Army Bound" Leo released to the Internet last year to the cleaned-up version presented on Living With The Living. But since Leo gave the earlier version away for free, we're more than happy to have both. So how about a taste? MP3s and full tour dates are below.