Meet The Mitchells Again For The First Time [MP3s] 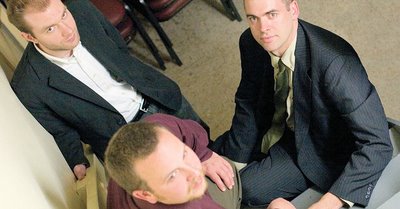 We find it hard to believe we've never encountered The Mitchells before, what with the band being both a long-running concern and one based in Northampton, Mass., a town in which we saw a lot of live rock and roll in the mid-'90s. But we guess stranger things have happened. The quartet, recently downsized to a trio, formed in 1994 and is fronted by the most recent New Radiant Storm King bassist Caleb Whetmore. Unsurprisingly, there are a number of sonic parallels between The Mitchells and New Radiant Storm King (also Boston's excellent The Beatings, although for the sake of our comparison we'll concentrate on NRSK). Both acts trade in tunes that strike weighty balances between melody and discord, angularity and convention. Both acts rock.

The Mitchells' urgent "Still Might Happen" (MP3 below) from its recently released fourth long-player Slow Gears recalls music from the most recent NRSK set The Steady Hand, maybe "Scuttled" or "Accountant Of The Year," which makes sense since that is the record Whetmore played on. We are surprised that we kind of favor Slow Gears to The Steady Hand; the former set is more taut and economical, while The Steady Hand was exceedingly glossy relative to classic early NRSK such as Rival Time. Anyhoo, based on a couple sessions with the full-album stream here, Slow Gears is stacked with great indie rock songs front to back. The way the guitar lines slither over one another at the end of "R.I." will make the hair stand up on the back of your neck. If you don't believe us, then check out the MP3 below. The Mitchells play P.A.'s Lounge in Somerville, MA Friday March 30 (that's a big weekend for music, what with the Meneguar show at Tufts the next night). Slow Gears was issued Jan. 23 on Pigeon.