Show Us Yours #5: Frightened Rabbit [MP3s] 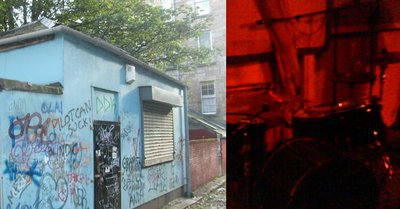 So, apparently some band from Canada put out a record today or something? Gameroom something? Something Conflagration? No matter. Today we once again in our way highlight the fickle nature of the blogosphere by not commenting on the Arcade Fire record turning our attention to Scotland. More specifically we're revisiting one of our favorite discoveries from January, the Glaswegian indie trio Frightened Rabbit. As we noted here and here at the time, the somewhat mysterious band of wrestling mask aficionadoes made a whirlwind tour of selected pockets of America in January on the strength of their dynamite debut Sing The Greys, which has inspired substantial fandom stateside despite its not having been released domestically yet. Below surnameless Frightened Rabbit guitarist Billy talks shop about the band's rehearsal space The Diving Bell (pictured supra) and, among other things, notes the benefits of a Scottish accent and the frustrations of American toilets. We round out the piece with the usual MP3s and links. Enjoy.

The Diving Bell is actually a lot like our band. It's a bit shabby and stinky and can sound terrible. But once you get in there and spend some time with it, it begins to feel like a wee house.

2. How has an idiosyncracy or quirk of this space has affected a song (or even your overall sound)?

I believe the value of this space lies in its contribution to the energy we put into our performances. It is always so darned cold in the room that we need to move A LOT to warm up. This then naturally translates to live shows which then results in some heavy sweating and stingy eyes.

Actually, recently its been the smell of vanilla face cream and curry, as some young upstarts decided to attack the door with said products. Bastards.

4. In January you played a handful of U.S. dates. Did you bring the wrestling masks from your hysterical press photos? Did customs officers gaze upon them with looks of confusion? Anything particularly zany or frustrating happen while you were here in the States? Was the response of the U.S. audiences different in any way from the response you get from your home crowd in Glasgow?

We left the masks at home I'm afraid. In the current climate of terror, I don't think the US customs officers would have seen the funny side. However, they may have stripped myself and grant to our underpants, effectively recreating [some of] those photos. I feel like the response to the shows [in the U.S.] was a lot better than some we have done [at home]. I was able to tell all my shitty jokes and get away with it because of my accent. The New York audiences were particularly vocal, which is always good. The most frustrating thing was how high up the water is in American toilets. I'll leave it to the imagination as to how that became annoying for us.

Next six months look fun. It'll hopefully include the recording of a second record, with a full release of our first album Sing the Greys in the USA. We're going to Texas next week, during which time we hope to eat a lot of meat. Any invites to festivals this summer will be met with a 'superyes' from us, so we hope to be doing a lot of foolish things in fields.

Here are two MP3s from Sing The Greys:

[Purchase Sing The Greys from Hits The Fan here]