Show Us Yours #2: Dirty On Purpose 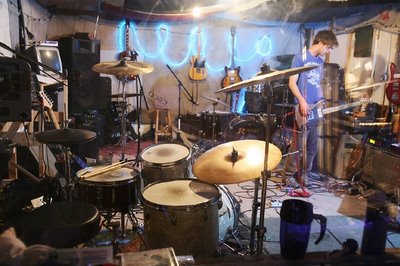 We couldn't be more pleased with our second installment of the Show Us Yours feature, this one featuring Brooklyn-based indie rockers Dirty On Purpose. The band is just about to issue its debut full-length Hallelujah Sirens, which you may recall :: clicky clicky :: reviewed here about a week ago. Turns out, a feature that looks at bands' practice spaces is pretty much tailor-made for an act like Dirty On Purpose. According to guitarist George Wilson, the band constructed its own space -- and a control room for recording demos, and even bedrooms -- in a Brooklyn warehouse. Crazy right? Here's what George shared with us. [photo credit: Gregory Wilson -- check out his web site, his pics -- especially the one of the beaten-up Marshall amp and head -- are awesome]

1. Why did you choose/why do you use this space?

Last year my brother Greg, our friend Mack, Oliver from A Place To Bury Strangers, Joe (from Dirty on Purpose) and myself found this huge old gutted warehouse space along the waterfront in Brooklyn. It had running water, sketchy electricity, plenty of mold and that's about it. On the plus side though, it was cheap, and there are no neighbors. We moved in right away. We piled all our stuff on one side and power-washed the whole thing, painted, and started building. It took us 2 months to get the basic structures in place. We used brick walls for the practice space because it keeps the space cool in the summer and doesn't really need any further sound proofing, so it ends up being far less expensive than standard sheet rock walls with insulation. But it was months more to get bedrooms, the 2nd floor and heat all in place. It was a very long and cold winter. But now we've got a large space in the house with a separate control room so we can get decent demo recordings whenever we want. We even did some of the tracking for Hallelujah Sirens there. The space is officially called "Death By Audio" (DBA) after Oliver’s pedal company.

2. Explain how an idiosyncracy or quirk of this space has affected a song (or even your overall sound).

I guess we've always had a rather large rehearsal space. Before we had the space at Death By Audio, we were in a 540 square foot space in Greenpoint, Brooklyn -- again something that we built ourselves on the cheap. But the last one was really built much more like a tree house. DBA is more like a bomb shelter. I think having the space that we do affords us the opportunity to really hear what's going on musically in the room. There is room for the music to breathe a little. Most of the other spaces I've been in feel like a ventilation shaft. You can't really hear the complexity of what's going on.

The coffee mug on the floor next to my amp. It's still almost half full of cold brown liquid. But over the past week or so, it's accumulated a dozen or so cigarette butts. The consistency has changed gradually to that of a thick dark syrup with a few clumps of cottage cheese. There's a grey mold growing among the butts. Is the cup even worth salvaging at this point? Then we come to Doug's naked feet. They do not help the situation.

4. Which do you like more: U2's The Joshua Tree or The Police's Synchronicity?

I guess Joshua Tree is maybe a better record, but right now I think I'd rather hear The Police.

Our first LP comes out in less then two weeks [ed. -- June 27 on North Street]. We're starting a six week tour in July, and then another in October. I don't really know what's going to happen. I guess we'll fill up the time in between with writing and trying to make rent.

Email ThisBlogThis!Share to TwitterShare to FacebookShare to Pinterest
Labels: Dirty On Purpose, ShowUsYours