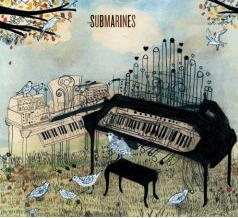 Let's face it: any week that follows the release of a rightfully lauded Sonic Youth record is going to be a let-down as far as new releases are concerned. That's pretty well supported by the fact that we aren't posting a Free Range Music today featuring AOL's weekly clutch of pre-release album streams: they're just not offering anything that catches our fancy (although we can point you to a bit of pre-release Sufjan Stevens right over here). Even so, there are some new titles in racks tomorrow that should entice the intrepid indie shopper. Frank Black is back with a two-disc collection, and The Submarines record we reviewed a couple months back here is finally seeing the light of day. As far as old stuff goes, UMG's Fontana label is reissueing The Jam's 1977 record This Is The Modern World. Personally, we're Compact Snap! kind of people, but we can't imagine that you wouldn't be pleased as punch with this record. Rhino's got a Luna best-of up for sale as well. Those records and one other comprise our picks for the week. All are listed below with links going to relevant commercial opportunities with favorite