The Week That Was: Eric Bachman, Voxtrot, Helmet 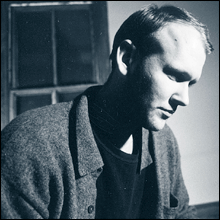 >> PunkNews reports that Crooked Fingers principal and former Archers Of Loaf fronter Eric Bachman will release a forthcoming solo set on midwest emo standard bearer Saddle Creek. The set, which Bachmann apparently wrote while living out of his tour van last summer and then recorded in a seaside hotel, is titled To The Races and it will hit racks Aug. 22. More details here and here.

>> While there's no corroboration at the band's web site yet, Austin, Texas-based anglophiles Voxtrot have signed with Beggars Group imprint Playlouder, according to BrooklynVegan here. The band is the label's second signing -- the first was Serena Maneesh.

>> Roadrunner's Blabbermouth.net here reports on the new record coming from Helmet on Warcon Enterprises. Curiously, the report states Helmet is recording again with Wharton Tiers to "return to the organic sound the band is known for." What? We haven't listened to a Helmet record since Betty, but we certainly wouldn't describe the band's sound as "organic." Paige Hamilton's group's breakthrough Meantime was lauded for its viciously mechanistic sound. Anyway, whatever. Hear three new songs at the band's PureVolume page here.

>> There were two very good features this past week. First, the Wall Street Journal here profiled recommendation engines including Pandora here. Well worth a read. Six years ago when we were covering this technology for the ill-fated digital music rag Webnoize.com these technologies were envisioned as playing a big roles in the nascent digital music services. While the technology has obviously made a niche with streaming music services, it doesn't seem like it has made any inroads with a la carte download services, including the market leader ITunes. Maybe we're just not seeing it. But anyway, the WSJ piece is a good snapshot of the current state of recommendation engines. The second feature of note is Pitchfork's in-depth discussion with Destroyer's Dan Bejar. This guy's genius status is pretty well-accepted, but that doesn't make reading him talk here about songwriting and indie music in general any less pleasurable.

>> We never knew that the title to Rocketship's absolutely essential A Certain Smile, A Certain Sadness was borrowed from an Astrid Gilberto record of the same name. Or so we believe based on this listing at Darla.com. Incidentally, Darla here is giving away a free MP3 from each of its last 15 releases. If you are among the couple dozen people who have made their way to :: clicky clicky :: via a Google search for the new Manual record, you are going to be pretty pleased to see an Manual MP3 there.

>> In our humble opinion Stereolab made one completely perfect album, Dots & Loops, and if you have that there isn't much of a need for any of their other records. If you feel the same way but want to get an overview of what the band has done throughout its entire major label career, Rhino's got you covered. According to Pfork here the reissue label will release a 'Lab anthology entitled Serene Velocity Aug. 22. More details here.
Posted by Unknown at 6/17/2006 03:51:00 PM