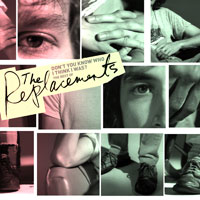 >> Paul's Page here digests what it believes to be a forthcoming Newsweek interview with Paul Westerberg, who says among other things: More than two songs were recorded during the sessions that resulted in the new Replacements tracks that will be included on the forthcoming best-of; "Message To The Boys" was not written specifically for the best-of, but rather it was written more than 10 years ago and set aside in case the band ever got back together; Tommy is game for a reunion; Fear of jeopardizing his sobriety is one thing that keeps Westerberg from committing to a reunion tour. Anyway, read the whole synopsis here.

>> According to its MySpace domicile, Swedish indie rockers Logh, creators of one of our favorite records of 2005, A Sunset Panorama, have added two new members. And get this: the sextet now includes three dudes named Mattias. We are not making this up. The new and third Mattias (last name Jeppsson) plays guitar, and the other new member is a keyboard player named Karl Arvidson. Logh is currently working on its fourth full-length and hopes to release it by the end of the year. We hope so too.

>> You can already buy Dirty On Purpose's forthcoming debut full-length Hallelujah Sirens at EMusic, and you should. It's good. We got our promo Friday and the record is remarkably solid.
Posted by Unknown at 6/05/2006 10:11:00 PM