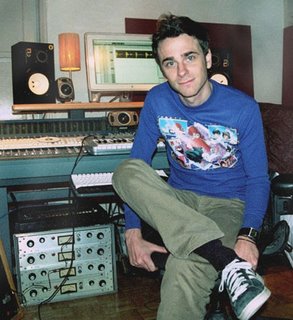 I've always been attracted to one-man-band recording wizards like Todd Rungren and Prince. The '90s offered up quite a few of these lone geniuses, and Matt Mahaffey is certainly one of the more interesting ones. Born in Kingsport, Tennessee, Mahaffey learned drums at a young age and was already playing in a cover band by the time he was nine.

After Mahaffey enrolled at Tennessee State University in Murfreesboro, he learned how to use a sampler and drum machine, producing tracks for local rappers in his spare time. As Mahaffey explained to Illinois College Bureau reporter Brian Conant, "That was insane. I'd lay beats for $40 cash and would have these 15-year-old kids come to my room with their white girlfriends whose babies were throwing up on my bed while we were laying down the track."

Presumably, Mahaffey used this influx of cash to fund the creation of indie label Spongebath Records along with friends Seth Timbs and his manager Rick Williams. After being kicked out of school for low grades, Mahaffey started focusing on his own music, which he appropriately dubbed Self. Self's debut, Subliminal Plastic Motives was a hit with critics (Ryan Schreiber of Pitchfork gave it an 8.0) and the album was picked up by Zoo for distribution. Two albums later, Self landed on Dreamworks, but never quite sold the number of albums everyone expected him to.

Dreamworks gave Mahaffey the boot around early 2000, but Mahaffey continued to release great records on Spongebath anyways, especially Gizmodgery, an album played on all toy instruments that includes a cover of the Doobie Brothers' "What a Fool Believes." (The album is now out of print and sells for big bucks on Ebay and Amazon.)

For the past six years, a great fansite called Selfies has been handling the Mahaffey estate, and there are tons of great mp3's and articles there. However, Spencer Wysinger, who helps maintain the site, recently wrote a post on the message board that he is leaving, citing "TiVo and my own outside projects" as the reasons. This is a sad day for Self fans, as the site is about as informative and loving as a fan site can be. If you have an interest in creative pop music, I highly suggest you check Selfies out before it goes the way of furniture.com.