Show Us Yours #4: Mobius Band 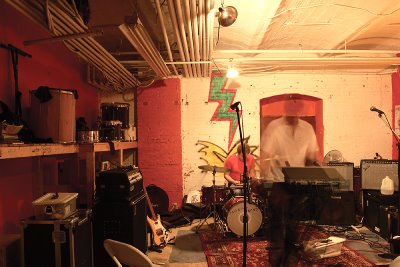 As we've asserted elsewhere, we've been following electronic rock cyborgs Mobius Band for quite a goodly while, several years even. You can imagine our excitement when we heard the super-cool trio's new demo that uber-blog Stereogum recently posted here. With yet another tour on the horizon we thought we'd check in with Mobius guitarist Ben Sterling and learn a bit about the formerly Western Mass.-based band's new-ish practice digs in Brooklyn. Mr. Sterling reports that a recent rancid stench in the space has suspiciously abated, and betrays some very strong feelings for The National and against Iron Maiden. We wrap up the piece with Mobius Band's fall tour dates, as promised back in August. The band's most recent set, The Loving Sounds Of Static, was issued last year on Ghostly International.

1. Why did you choose this space?

To be honest, it was the first practice space I looked at. We share it with a revolving cast of bands. It's decorated in burnout Dorm Room Chic. There's a truly gigantic poster of Jack Nicholson's head from The Shining. It's really, really big. And as you can see, there is a huge lightning bolt as well.

The place is convenient as hell to get to and, as the neighborhood around it continues to gentrify, there are more and more places to get panini sandwiches when we take our inevitable breaks from the basement. 2/3rds of the band support these panini sandwiches. 1/3rd holds out, probably out of spite that he was last to the panini party (AGAIN).

2. Explain how an idiosyncracy or quirk of this space or a former practice space has affected a song (or even your overall sound).

If anything, our space makes some things more of a guessing game as all the electronics we send through the PA come back really muddy. That PA is so not ready for primetime. We go play a show at a club with a nice system and we're like "oh, the handclap is twenty times louder than the bass drum, awesome."

Before this, we all lived in Western Massachusetts, so we never needed a separate practice space. We'd just practice at a house. Me and Peter lived with a few friends in a run down '70s split-level, sort of a "Love Shack" kind of place. I think that set up, where we didn't have to deal with travel and everything was in-house and set up all the time, was really important in getting us to where we are now as a band. You get so used to each other musically that it makes the fact we can't rehearse as much now a lot easier.

3. You walk into your space. What's the first thing you smell?

Until recently, the fetid stench of decaying rat corpse. It was truly awful. We assumed it was a rat. It was something, though, and it was dead. As of a few days ago, though, the rat seems to have either been removed or entered a "non-stank" cycle in its organic breakdown. I should mention that this isn't directly inside our room, but rather in the "ante-chamber" that leads to it. The practice space itself smells like a mixture of basement smell, tube amps and general "dude."

My old housemate is going to kill me, but fuck Maiden. Branson's got the cash and the skills to take me higher.

didn't know the band until now. thoroughly enjoyed the interview.

loved the comments about the practice space!

Even though we never get to host 'em.