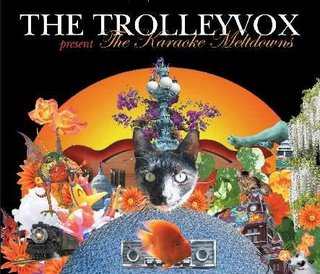 Only becoming aware of his lengthy resume after the fact, we first heard the work of Trolleyvox songwriter and guitarist Andrew Chalfen when he was a sideman with Philadelphia-based indie stalwart Joey Sweeney in the mid-'90s. In this role he added piano to Mr. Sweeney's excellent debut solo EP Heartache Baseball and performed with a short-lived Sweeney lineup that included Alex Kemp and Phoebe Summersquash of Small Factory/Godrays. That was a long time ago. Sometime during the intervening years we moved away from Philly and forgot about Mr Chalfen and what he might be up to. That is, until we caught wind this past July that Chalfen would be releasing a third full-length for his long-running guitar pop project The Trolleyvox. The set, entitled The Trolleyvox Present The Karaoke Meltdowns, packs equal parts folk-rock and power pop into a hook-filled baker's dozen compelling tracks.

Front and center in the Trolleyvox sound is Chalfen's dense guitar work and singer Beth Filla's bell-clear vocals. "I Am Annabelle" is ushered in with a Townshend-ian lick before striking jaunty poses across an understated, syncopated verse and chorus; "Deep Blue Central" also has an acoustic The Who feel. "I Know That You're High" touts a soft attack that knowingly winks in the directon of The Byrds. The set skids a bit with the feather-light strummer "Twilight Hotel," but is instantly redeemed by the infectious album highlight "Joyride." It's not all classic rock influence -- fans of the aforementioned Small Factory and acts like Miracle Legion will find a lot to like among these 13 tracks. The Trolleyvox Present The Karaoke Meltdowns streets Oct. 17 on the Transit Of Venus label. Additionally, Transit Of Venus plans to release a Trolleyvox double EP next spring. In the meantime, check out the MP3 posted below and at the band's MySpace hacienda. We've also linked to a video for "Just You Wait" and helpfully listed some Trolleyvox tour dates below.