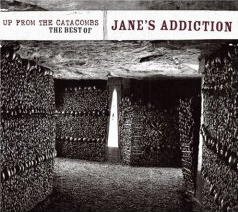 >> AOL has a bit of minor trivia posted with the Jane's Addiction album stream now available in its pre-release album stream corral. Because we are big fans of the song we feel it is worth relaying that the title of the act's greatest hits package that streets tomorrow comes from the nihilistic, tribal thrasher "Chip Away." That song does not appear on the compilation; it is the last track on the band's amazing semi-live, self-titled debut released on XXX in 1987. The compilation offers a respectable overview of the Jane's Addiction's catalog, favoring as it does the band's astonishing and dare we say important first three records -- records that everyone should own and listen to from end-to-end.

The tracks "Superman" and "Just Because" stick out like proverbial sore thumbs in the running order of Up From The Catacombs: The Best Of Jane's Addiction. That's because the tracks, from Jane's Addiction's 2003 reunion effort Strays, just flatly shouldn't be there. To further amplify our sentiment, it is worth pointing out that according to AllMusic, the then-band members don't even get complete writing credit for the tracks -- hello Bob Ezrin.

Jane's Addiction made three perfect records, but the quartet's efforts in the last decade simply don't measure up. It would be fascinating to hash out why that is, although it may not be possible. Why does any band run out of enthralling material? Working in its favor in its heyday was the fact that Jane's always had a dangerous aura, and -- particularly in the latter days of its first go-'round -- the band also seemed poised to self-destruct at any moment. Jane's Addiction came from, and perhaps largely defined, a time when it seemed like there was really something wrong with the biggest acts of the day -- and that stoked fan excitement no small amount. In the last 10 years it seems that most bands like to assume the affectation that there is something wrong with them, but few actually live up to that odd (and oddly respected, at least by us, but we think also by music fandom at large) status. Again, it would be fascinating to explore why music made by those who are truly f*cked up is more compelling than most. But we'll save that investigation for another time and just state that for five or six years in the late '80s and early '90s, Jane's Addiction was one such band, and they were awesome. Stream Up From The Catacombs: The Best Of Jane's Addiction at the link below. We've also thrown in links to a new Alice In Chains hits comp -- a double-disc set -- and The Big Sleep's Son Of A Tiger, which has been growing buzz for what seems like years.

>> Not to be outdone, Rbally has posted what my man Kumar says is a rock solid live set from Jane's Addiction recorded in 1991 in Seattle. We've just put it on and can report that at least as far as the first two tracks are concerned the sound is superlatively clear and powerful and the band is on fire. Good golly, run don't walk over here and get the set while it is still available.

>> Speaking of live sets, don't miss the latest offering from Bradley's Almanac. This week's Mr. 'Nac is offering a hot live set from Atlanta-based indie rockers Snowden recorded last month here in Boston. Check it out here. The band is back in town Sept. 25 at The Middle East.

>> WavedRumor here points us to this stream for the forthcoming Robert Pollard solo set Normal Happiness. We just received the record Friday in the mail and it is a nice set of tight indie rock numbers. Well worth catching the stream.
Posted by Unknown at 9/18/2006 08:41:00 PM