That Was The Show That Was: Mobius Band, Baby Dayliner 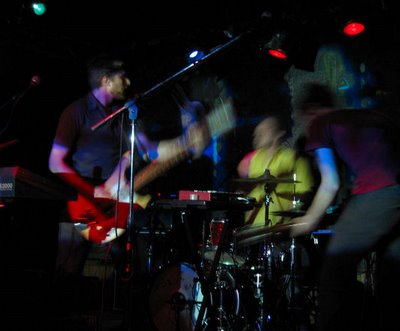 As we've mentioned a couple times previously, we made what surprisingly was our first trek to Boston's Great Scott club this past week to catch :: clicky clicky :: faves The Mobius Band make a strong return to town after a relatively extended absence. The band had intended to play here over the summer, but the tire of a borrowed van had other ideas. The trio succeeded in making the scene Wednesday, and they delivered a compelling 45-minute set comprised of equal parts old hits and new tunes.

The band took the stage at about 12:30 and performed two cuts from the City Vs. Country EP, a set that received a surprising amount of attention that night considering the band's most recent release is the fantastic 2005 full-length The Loving Sounds Of Static. Anyway, a road-hardened and confident Mobius Band opened with a stirring version of "Multiply" and then "City Vs. Country" (which is hard not to hear as partially autobiographical, considering two thirds of the band moved to Brooklyn from Western Mass. a couple years back) before launching into the powerful new tune "A Hint Of Blood." The latter number is a bleepy, Peter Sax-sung tune whose demo we've hyped previously here and that you can now download via the band's site here [right click and save as].

From here the band launched into a succession of several new tunes, including one with an unexpected pop reggae rhythm. None disappointed, and the band closed out with another cut from City Vs. Country, which you may have already heard in a shoe commercial, "Starts Off With A Bang." The final line of the tune, which begins "so... sick of music," gets us every time. And it would have made a fitting close to the show, but the fans clamored, and Mobius Band obliged with the "hit" title track to last year's full-length, a remix of which you can download here [right click and save as].

Before Mobius' set we asked guitarist Ben Sterling about the band's future recording plans, and he said that none are forthcoming as yet, that the band is continuing to write new material. We most recently wrote about Mobius Band in Show Us Yours #4, where you can also find the rest of the trio's tour dates. Finally, below we link to three MP3s you should have heard long, long ago, although right now we are digging very hard on Benoit Pioulard's remix of "You're Wrong" posted at the band's MySpace dojo here.

The supporting acts were a mix and match of different genres. Each is worth mentioning for different reasons. The startlingly young-looking openers Scary Monsters took the stage after a few Strokes tunes were played over the public address and the similarities between the two were easy to identify. We would be surprised to hear that the bass player of Scary Monsters was older than sixteen, although his youthful appearance reminded us of Sid Vicious -- only Scary Monster's bassist can actually play. On the whole we were fairly impressed with the act. Several years from now they are probably going to make a record people will really be talking about.

Instrumental post-rockers Caspian played a handful of extended, dynamic space jams that sounded, in a good way, as if they were lifted straight from sets by Mono, Explosions In The Sky or Godspeed You Black Emporer. Really. Caspian was exciting to watch, and although the dynamic road maps for each of their songs were somewhat similar, that didn't make them less affecting.

Like our man H-Dawg From Accounts Receivable, who hipped us to the Baby Dayliner album in the first place, we are still having a hard time knowing what to make of Mr. Dayliner's performance. His set basically consisted of him doing karaoke to his own tracks, which emanated from a recorder stored in a small vintage suitcase situated on a stand behind him on the stage. His performance strangely bordered on something you might expect from a really ambitious busker in a subway station, but Mr. Dayliner's quiet enthusiasm was hard to resist. And perhaps the biggest surprise of the entire night, of any of the sets, was the particularly rabid fanbase that showed up for Baby Dayliner. It was a real crowd of characters, at least a few of who appeared as if they had just been sprung from the Island of Misfit Toys in the old Rudolph The Red-Nosed Reindeer stop-motion classic.

We've got a few pictures of Baby Dayliner at Flickr here, and a whole lotta Mobius Band pics here. Do check 'em out. And because it has been several paragraphs since we mentioned them, below are links to some Mobius Band tracks you can download and play to your heart's content.