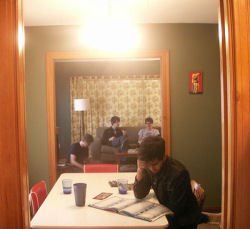 >> The InterWeb is abuzz this morning with word that the forthcoming debut full-length from Texas-based indie pop act Voxtrot has leaked, although it is not due until May 22. We rarely seek out leaks, and this is no exception. We were underwhelmed by the band's most recent EP, Your Biggest Fan, and we even thought the Mothers, Sisters, Daughters & Wives EP lacked some of the passion and songcraft of Voxtrot's debut EP Raised By Wolves, which included the great track "The Start Of Something" we link to below. We'll be interested to hear Voxtrot when it is released, but there is plenty of indie rock to listen to in the meantime...

>> For example, the new Modest Mouse record, all of which is currently posted to the band's MySpace yert here. We hadn't heard any of the leaked tracks yet (like we said above, rarely) but did read initial negative message board reaction with concern. We're pleased to report that We Were Dead Before The Ship Even Sank, the band's 7th record which streets Tuesday, sounds great. It is certainly consistent with the most recent Modest Mouse stuff, which is to say there is a lot less jagged dissonance and meth-rattled ranting. But band leader Isaac Brock has pop genius skills to burn, as proved by the prior Modest Mouse record Good News For People Who Like Bad News, and we continue to hear a welcome, latter-period Cure influence creeping into the music. And you know what? We don't like that fellow from The Shins singing on the one track -- it's distracting. Modest Mouse has already announce a short slate of tour dates to promote the release of We Were Dead... (or as Ian Mackaye recently said in an excellent interview with Ian Svenonious on VBS's absolutely great Soft Focus web show, the release promotes a slate of tour dates). You can check out all the MM tour dates at Pollstar here. Finally, a recent Q+A in Billboard includes information that Brock is working on reviving his Ugly Casanova sideproject. Good news.

>> Speaking of The Cure, this semi-cryptic message at the band's web site indicates Robert Smith and his merry men will embark on a world tour later this year, beginning in the Far East and Oceania. We hope this is a tour to support the release of the anticipated DVD collection of Cure videos collecting material from year's past including "In Orange" and a number of other things we've never seen. We do have the "Staring At The Sea" video collection on VHS, but VHS tapes are basically useless to us now. The Cure is also in the middle of an ambitious effort to re-release its catalog in expanded editions, and this alleged tour could be in support of the release of the next batch, which should include expanded versions of Kiss Me, Kiss Me, Kiss Me and Disintegration. Well, actually, according to this article the tour is to support a forthcoming new set that Smith describes as similar to Kiss Me, Kiss Me, Kiss Me in that the record includes a wide variety of material. There are enough songs for a double album, but Smith says half of them will make the physical release and the other half will be issued in some digital manner. Perhaps most importantly to us, Smith states that on the set keyboard is being used "very sparingly," which we like to hear since we are of the opinion Kiss Me is near-ruined by the overuse of keyboards.

>> Hear anything interesting relating to indie rock? Let us know about it by emailing wehearclickyclicky at gmail dot com.
Posted by Unknown at 3/17/2007 12:13:00 PM