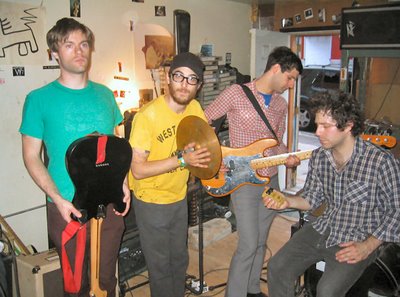 Meneguar. They're better than your band. The Brooklyn-based indie rock quartet is probably better than your favorite band. So the relative low profile of Meneguar continues to confound us. Perhaps it is due to the fact that the act isn't the touring mainstay that, say, noted road warriors Snowden are. Perhaps it is because of their relatively limited output, as Meneguar has but one EP, I Was Born At Night, released (and then re-released) on CD. There's a more recent single, and then there's some stuff on cassettes that you probably can't buy anymore. The full discography is online right here. Even so, the band's relatively small output is 100% quality.

In late summer or early fall Meneguar will dramatically expand its catalog when it issues a first proper full-length via Troubleman Unlimited, Strangers In Our House, as well as a couple planned one-sided vinyl records. Attendant European and U.S. tours are in the planning stages. In the meantime the band has some domestic dates this spring, including a local date at Medford, Mass.'s Tufts University at the end of this month. While we regularly rant about the band here, we seized upon the occasion of this show as an opportunity to put to rest a long-in-the-works Show Us Yours feature with Meneguar. Below singer and guitarist Jarvis Taveniere professes a love of Little Debbie snack cakes, explains the irritation of moving band gear and offers more details about the band's practice space and future releases.

We practice at our friend Mark's studio called Emandee. We've been recording and practicing there since 2000 and it just feels like home.

2. How has a quirk of this space or a former space affected the band, its over-all sound or the sound of a certain track?

For a while we had a practice space about half-hour drive from our house. It had this really tiny elevator that barely fit everything in it and, to top if off, it didn't have a hold button in it. So more than once I was picking up an amp and realized that the door had shut and that I was [already] on my way back down. So frustrating. I think it made us play fewer shows. We just hated unloading.

3. You walk into your practice space. What's the first thing you smell? Why?

4. It seems like, with three planned releases, the band has hit a very productive cycle. We recall the original plan for the follow-up to I Was Born At Night was to record it yourselves (as you did with "Bury A Flower"). Did any self-recorded material make it onto Strangers?

We did start off recording the new record ourselves. We did bass, drums and some guitars at a friend's studio with Justin (Wertz, Meneguar's bass player) doing all of the engineering. We continued working on it at home, but we hit a wall with what sounds we wanted and what sounds we were actually capable of getting with what little gear we had. So we went to another friend's studio (The Civil Defense, in Brooklyn) for vocals, random overdubs and mixing. We kept doing overdubs at home and at the practice space, and we put it all together in the studio. Both of the Woodsist LPs are being recorded at home and will sound a little more like the "Bury A Flower" 7 inch, which I still think sounds great.

5. What do the next six months look like for Meneguar?

We've just about finished mixing the new record and we're just putting on the finishing touches (art work, song order, etc.). It'll be released late summer/early fall and right around then we'll tour Europe, the UK and the states soon after that. We're gonna dive into the world of music videos soon, too...