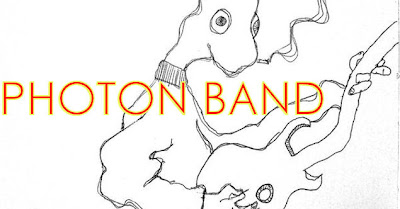 >> Remember a couple months ago when we posted here that long-running power-pop concern The Photon Band was about to release a five-song EP called Get Down Here In The Stratosphere? Well, the initial March 8 release date came and went, but a new MySpace bulletin promises the set should be available at unnamed digital storefronts this coming week (perhaps it will even end up in the Philebrity Player?). We'll let you know when we see it pop up. Philly-based Photon Band, fronted by one-time Lilys-member Art DiFuria, also plans to release a full-length set in June called Back Down To Earth. Not up on your Photon Band lore? The act's first release was a very good single on Darla "747 (Don't Worry)," which was issued in 1996. You can learn more here, and you can snag most if not all of the band's catalog from EMusic (incidentally, "747" also appears on the compilation Our Own ESP Driven Scene). If we had to pick a favorite Photon Band cut, we'd be forced to pick two. Here they are, for a limited time:

>> This simple Q+A at Exclaim! -- probably executed via email -- is one of the more insightful interviews with guitar god J Mascis that we've read. And we're not just saying that because he professes an affinity for the erstwhile teen soap "Dawson's Creek." Mascis discusses his own, shall we say, unique conversational style. He also states that he likes that he hasn't committed suicide yet, he was both pleased and disappointed by an appearance with Tony Bennett, and on and on. There is really interesting information here, and the reason we are fairly certain it was done via email is because any journalist that doesn't pose a follow up question to Mascis' mentions of suicide and Lollapalooza should be fired for not doing their job. Dinosaur Jr. performs on Letterman tomorrow night, and then the trio's excellent new record Beyond will street Tuesday. We reviewed the record here early in the month. It's awesome.

>> We've followed with some interest the rise of Last.FM, so we were especially interested to read here at Digital Music News that preliminary acquisition discussions between it and Viacom have floated a valuation of $450 million on the British company. While current exchange rates make that only 225 million pounds or so, it is still an impressive figure representing a whole lotta scrobbles. In February we speculated here that Last.FM is a likely acquisition target. Our guess for a logical suitor was AOL, and we would be surprised to learn the AOL and Last.FM haven't had any contact. While you ponder the fate of Last.FM, how about checking out our profile?

Thank you for pointing out this excellent Q&A with J Mascis. The end of it includes the second speculation I have read in conjunction with the release of Beyond as to why Dinosaur Jr. do not seem more influential. I feel the answer is more simple than either analysis has suggested; people can't do what he does. They can't play like that, they can't write songs like that. If your sing like that without the other playing like that or writing like that, you just sound really stupid. Not to minimize the work of the Pixies, Nirvana, Sonic Youth or any other contemporaries, but it's a lot easier imitated.