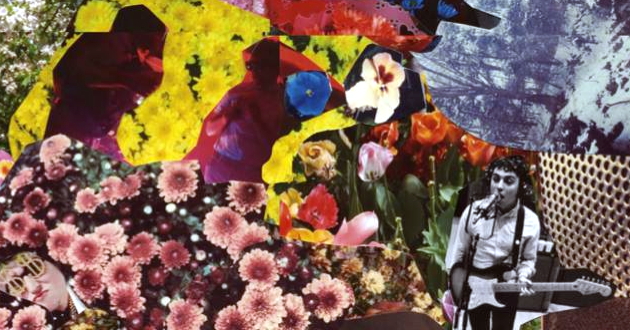 >> We make every effort to stay abreast of the Philadelphia music scene, even as we lack the time to cover every single development from the fertile scene. We were surprised, then, to learn recently of Philly indie-pop unit Literature, whose sophomore album Chorus will be released later this month via Slumberland. The group is following up 2012's wonderful Arab Spring, which dropped shortly after Literature moved to Pennsylvania from Austin (which, we suppose, explains why these cats weren't on our radar). Literature has also appeared on various notable compilations in the intervening years and played events such as the NYC Popfest, and supported such Clicky Clicky-approved acts as Brown Recluse,Sic Alps and The Pains of Being Pure at Heart. And so, unsurprisingly, the new set sounds right at home in the Slumberland catalog. On lead single "The English Softhearts," Literature distinguishes itself with effective keyboard playing (which switches warm synth tones mid-song) and dances with the bright Smiths- and Orange Juice-styled guitar work. If there's a member of the band playing both that and an electric guitar throughout the tune live, props to them. Also notable is lead singer Kevin Attics' voice, one among a fine procession of anglophile Yankee singers that aims for an accent but ends up with something ultimately more exotic and in-between (Nota Bene: this isn't meant as a slight, but rather is intended to illuminate a phenomenon that this reviewer famously enjoys). Mr. Attics succeeds at this more than most, sounding legitimately British (or at least an expat?) and much like a recharged and exuberant Alasdair MacLean of The Clientele. While "The English Softhearts" trades in all manner of classic dynamic tics, the best part of the song is the four-bar bridge toward the end, where pillowy synth-strings and a deep bass line seal the deal on the implied elegance to which the band earnestly aspires. The second preview tune, the elegant dreamer "New Jacket," is no less excellent, pairing nervy guitar jangle and wiry leads with a glistening, icy ambience that feels urgent but timeless. Chorus is set to arrive on CD and vinyl via the legendary Slumberland Aug.19; pre-order the set right here, and consider taking advantage of the label's limited time offer of a bundle of Chorus and Arab Spring. Has the label ever steered you wrong before? -- Edward Charlton

>> In-demand Philly studio guy Jeff Zeigler, the busy engineer behind Clicky Clicky-approved records by artists like A Sunny Day in Glasgow, Kurt Vile, Nothing and Purling Hiss (as well as the frontman for the visionary Arc In Round), this past winter teamed with harpist Mary Lattimore to craft a pleasantly meandering set called Slant Of Light, which will be released by the esteemed Thrill Jockey label Sept. 22. As this blog can't foresee anything not to love about Zeigler's work (we eagerly, eagerly await his long-anticipated solo record), this collaboration seems certain to deliver compelling ambient/post-rock optimal for autumnal daydreaming. Although the four-song tracklisting has been announced (and a version of the lead track "Welsh Corgis In The Snow" previously graced Zeigler's Soundcloud at one point, but is understandably now absent), at press time no preview single from the record has been released. The press materials announcing Slant Of Light, however, point to a compelling live video of the pair performing an untitled piece last summer that indicates what fans can expect from the duo's debut. Lattimore's harp makes unbelievably beautiful and avant garde sounds strained through a Line 6 delay while Zeigler manipulates the mix in real time and lays in smooth, pulsing bass synth chords. The twinkling and ethereal work demonstrates a masterful patience and exciting sense of play that makes us especially eager to catch the duo live. It does plan to make appearances to support the set, which can be pre-ordered right here. The record is being sold on CD and vinyl, with the latter available in a limited edition of 500 pressed to white media. Interface with the video below. -- Edward Charlton

>> Perhaps, as this reviewer would like to think, London-based "reverb-pop" outfit Mooncreatures took seriously our executive editor's March lament regarding a two-year release gap, as it is already queueing up the release of a second title in 2014, a cassette called Sand Maps. While the noteworthy and cinematic prior release Gaslamps was reason enough for celebration, Sand Maps presents still more of the band's impressionistic ambience augmented with fresh dynamic elements that point to the project's continued evolution. The mysterious duo -- which we now know includes Rhys Griffiths and Martyn Dunn -- proffers windblown, dreamy new age/wave within a specific and fragile analogue/electronic context that is singularly their own. This time out, however, on songs such as "The Shallows," the act somewhat surprisingly arrives at something resembling a noisy, traditional rock song, complete with full-blown guitar solos and palm muting -- not what one would generally associate with the typically steady-yet-soft project. Opener "(sea cure)" ratchets a short-delay loop pedal after the first 39 seconds and doesn't let up. "Salt Sea," "Pacific Theme (Solar Effect)," and "Tender Stems, Desert Winds" all tread in territory similar to their previous releases, but retain much of the the delightful affectations -- vocal sibilance, rich synths, and heaps of delay. "Landgrab" perhaps best pulls at the heartstrings, its yearning melody and subdued beat attaining an admirable floating effect while tasteful reverse-delay threatens to derail the tune, just like the harsh gales of the English moors where these two creative minds at least telepathically reside. Sand Maps was released July 18 by the new London-based and Beko Disques-affiliated label Balloon Festival in a limited edition of 40 pea-green cassettes. Buy it here. -- Edward Charlton