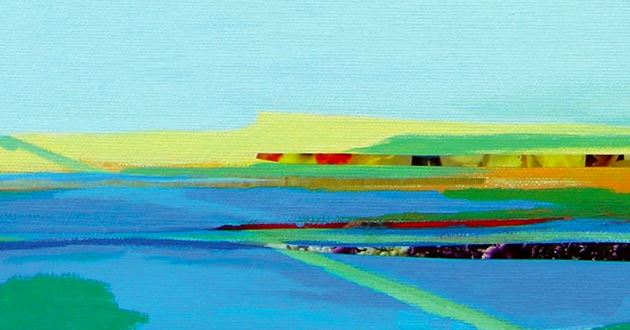 >> Boston dream-pop institution The Hush Now disclosed late last week that it will self-release its long-awaited fourth full-length, Sparkle Drive, next month. The act, now operating as a quartet, has issued to the wilds of the Internet an appropriately sparkling preview track, the mid-tempo strummer "Arthur Come On, Really You Can't Be Serious." The tune gives lead guitarist Adam Quane a turn at the microphone; long-time fans will remember Mr. Quane's vocal debut with The Hush Now was on the jaunty bouncer "Cameraphone," which graced the band's terrific third LP Memos, which we reviewed here in 2011. "Arthur Come On, Really You Can't Be Serious" carries Quane's characteristic quavering vocal and is anchored by rich bass tones and layer upon melodic layer of the band's big guitars. As strong as "Arthur" is, it isn't even the best Quane-sung tune on Sparkle Drive; the album opens with the darker, more ethereal composition "Panda" --which touts a spectacular, glistening outro in its final minute -- which we think will connect strongly with fans when the album is released Sept. 23. The Hush Now has been quiet, but not entirely quiet, in the three years since the release of Memos. Among other things, readers will recall founder Noel Kelly picked up his guitar to write a response to the Boston Marathon bombings, and more recently he memorably covered Neil Young's "Motion Pictures" to promote a show over the summer. Information about a proper Sparkle Drive release show has not yet been revealed, but you can watch the band's Facebook outpost for further bulletins. In the meantime, stream "Arthur Come On, Really You Can't Be Serious" via the Soundcloud embed below.

>> The Internerds went all aflutter a couple weeks back with the news that Krill's dearly departed drummer Luke Pyenson had joined a band in London, that the band was good, and that the quartet had a pretty great song in the fuzzy gem "Sea Toad." All of the above is, in fact, true. But by the time Brunch -- that's the name of the band -- dropped its self-titled debut EP last week, much of the Internerds had already moved on. Which is too bad, because it turns out *all* of the noise-pop upstarts' EP is terrific. "Sea Toad" is a fine calling card, yes, flexing scritchy riffage under a high and lonesome lead guitar and fronter Sean Brook's pliable and evocative baritone. However, the best tune of the short stack is its anthemic centerpiece "Tidal Wav." The tune touts an oversized and yearning vocal hook in the chorus, with verses that remind this reviewer of the patient plod of The Velvet Underground's "Lady Godiva's Operation," while the huge chorus echoes the more contemporary outsidery crunch of Dark Blue or even the shadowy London act Black Seas. The succeeding number "Cordial I" slows the tempo and thins out the sonic picture for quiet verses that set up the aggressive choogle of the tune's final 90 seconds. Surprisingly, Brunch plans to come to the U.S. in late September/early October (according to the act's Bandcamp page) to play some shows, and we're very hopeful we'll see the band right here in Boston playing with Krill, because, you know, that seems like a really obvious thing for them to do, and because we like rock and roll music. You should spend time with the Brunch EP, it's time very well spent, and if you pony up the £3 asking price for either the download or handmade CD, you'll be helping in an albeit small way to get the band across the pond for the aforementioned U.S. shows. Stream the entire EP via the embed below, and then click through to purchase.