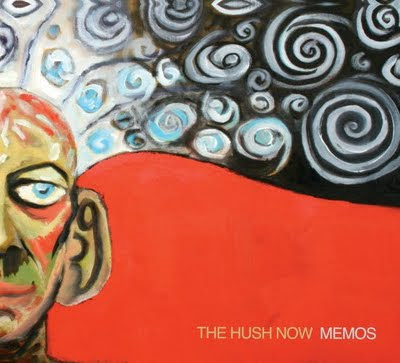 The irony of The Hush Now's outstanding third long-player is that while the brilliantly crafted collection completely redefines the band, Memos leaves critics with little tidy shorthand with which to bullet-point the Boston-based quintet. No longer are tags like "indie pop" or "shoegaze" -- useful in summarizing The Hush Now's first couple records and recent, triumphant live shows, respectively -- remotely sufficient. We've mentioned previously here in these electronic pages the impressive mastery of various styles present on the mighty Memos. The combination of the band firing on all cylinders writing and performing with the very able production and mixing of Mad Oak Studios' Benny Grotto makes Memos The Hush Now's most confident and intense album to date.

The record conclusively establishes founder Noel Kelly and company as master craftsmen of guitar pop. Memos thrives on the increasingly crucial songwriting collaborations among the band members; in conversation Mr. Kelly is just as likely to attribute a lyric or guitar part to drummer and secret weapon Barry Marino, or a vocal to lead guitarist Adam Quane, for example, than himself. It speaks volumes about The Hush Now's confidence in the sparkling results that, for the first time, the quintet will not be giving away its new record for free (as was the practice with The Hush Now and both iterations of Constellations). Memos of course contains a fair amount of uptempo guitar pop that can be considered classic Hush Now. The banger "Rooftops" in particular reverently recreates the style of the band's self-titled debut. A pulsing bass line and syncopated drumming coils "Clouds" tightly before the song explodes into each chorus, Kelly's voice rocketing an octave as distorted guitar engulfs the stereo field.

But there is so much more going on on Memos. Strip the prominent lead synth line from the fore of "Cameraphone" and what's left is a convincingly great glam stomper during which Kelly's verse alternates with lead guitarist Adam Quane's best approximation of a J. Mascis vocal. "The Glow" is the next in a series of The Hush Now's made-for-the-dancefloor groovers, filled with overbiting, vamping bass and guitar lines. Where the Bostonians impress most with this collection, however, is the sentimental material; Kelly and his cohort characteristically concern themselves with affairs of the heart, and Memos is no different. Every review of the record could rightly begin and end with a discussion of the wistful bar-room ballad "Sitting On A Slow Clock," a tune with significant songwriting contributions from Mr. Marino. We can speak from experience (playing the song at a DJ night in August) that "Slow Clock" stops listeners in their tracks. It's got a simple plodding rhythm, mostly brushes and hi-hat, and a beautiful piano melody complemented by occasional, understated trumpet leads delivered by Kelly, doing his best Chet Baker.

The Hush Now self-release Memos Sept. 27. Stream the first single and lead track from the record, the yearning rocker "Arkansas" (wherein the band references its dance-floor banger "Vietnam Giraffe" with a wink, because why the hell not?), via the Soundcloud embed below. After a soon-to-be-announced, RSL Blog-hosted record release show Sept. 23, the quintet launches a tour of the eastern U.S. Oct. 6 and full tour dates are listed below. Clicky Clicky Music and our chums at The Ash Gray Proclamation will host The Hush Now's tour homecoming show at Precinct in Somerville, Mass. Saturday, Oct. 22. It's going to be a really special night; details TBA. Speaking of AGP, Executive Editor Bryan Hamill today publishes an in-depth interview with Noel Kelly that you can read right here.