That Was The Show That Was: The Dirty Nil with Greys, Sneeze, Blessed State | O'Brien's Pub | 20 Aug. 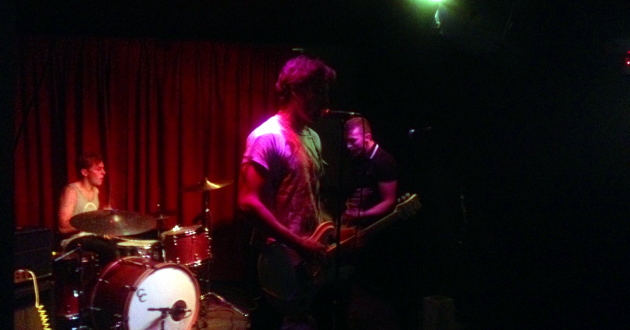 [PHOTO: The Dirty Nil by Dillon Riley] Nothing like a good redemption story, yeah? Wednesday night's Canadian-guitar-slinger-heavy lineup at O'Brien's in Allston Rock City featured Ontario garage rockers The Dirty Nil, who were in town with tourmates/province-mates Greys. Not that either act in particular need redemption, but after a burger-flavored disaster in February, The Dirty Nil surely must have been grateful to finally bring the rock to Boston. We can report that the rock in question was brought, and most steadfastly. The good guys win!

Just this week The Dirty Nil unleashed a two-sided, 7" piece of media via Fat Wreck Chords, and the platter offers a tidy summation of the trio's quick-hit sound. Layers of thick, fuzzy chords and chunky bass lines surround frenetic, short-burst drum fills, while fronter Luke Bentham's unpolished vocals erratically swell into full-throated screams. The Nil deployed both new tunes Wednesday, with A-side "Cinnamon" even eliciting a bit of a sing-a-long among the crowd during its infectious chorus. Elsewhere, the band blasted through some hardcore-influenced and newer (at least to these ears) tunes, as well as few numbers from its scattered short-form oeuvre. The song that struck hardest was "Wrestle You To Hüsker Dü," whose in-the-pocket groove afforded Mr. Bentham the opportunity to let loose with some rock-star stage heroics. Bonus points go to bass player Dave Nardi and his impassioned anti-Tasty Burger rant and related "Fuck Tasty Burger" chant. Not that we wish the burger vendor any ill will, but we do like to see rabble being roused now and then. We've embedded both "Cinnamon" and its flip "Guided By Vices" below, and fans can purchase the 7" or MP3s of same from Fat Wreck Chords right here.

Carpark Records signees Greys closed out the show with its own brand of hyperkinetic post-hardcore fury. Playing tunes mostly from its recently released and blistering debut LP If Anything, the quartet did an immaculate job of replicating the tumescent, near-claustrophobic sound of the record on O'Brien's relatively small stage. Greys wasted no time getting to the should-be-hits, jumping from the buzz-sawing "Use Your Delusion" straight into its fireball LP-opener "Guy Picciotto" and then "Pretty Grim" without missing a beat. Other tunes from the record meshed nicely led up to a well-timed and well-received cover of Mission Of Burma's colossal rocker "That's How I Escaped My Certain Fate," making for a thrilling end to an excellent night of music. Carpark issued If Anything in June, and would be quite pleased to sell you a copy in one or more of a variety of formats that can be considered right here.

Local superfuzz maestros Sneeze batted second slinging tunes off its powerful sophomore LP Wilt as well as a handful of yet-to-be recorded tunes slated for a forthcoming release which the trio claimed would be in the public sphere in "a year or two." The more we listen, the better Wilt sounds, and the same can be said for each live show we catch from the trio; buy Wilt from Glory Kid right here. Rising Western Mass. punx Blessed State -- which features at least one former member of erstwhile progressive beard-core foursome They And Their Children -- opened the night with tunes taken from its well-received debut full-length Head Space, which can be purchased here. -- Dillon Riley

Email ThisBlogThis!Share to TwitterShare to FacebookShare to Pinterest
Labels: Blessed State, Greys, Mission Of Burma, Sneeze, The Dirty Nil, They And Their Children