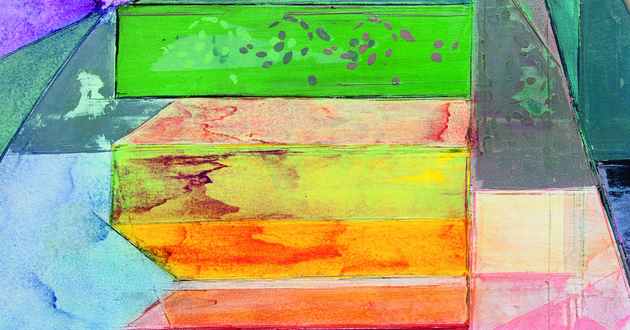 >> It's been more than two years since we first turned onto Cologne, Germany-based noise pop band Ahuizotl. Back in early 2012 we were significantly jazzed by the foursome's Lice EP, and we've been eagerly awaiting new material ever since. Our patience is finally being rewarded, as the quartet at long last announced last week that its debut long-player Integrity Is Overrated will be released Oct. 24 on the Cologne-based imprint Tumbleweed Records. The first preview of the forthcoming set is the quasi-title track "Movie," a compact and downcast slice of strummy guitar-pop that reiterates the best aspects of the tunes on the Lice EP, namely foregrounded guitars, precise rhythms, dreamy synth and yearning vocals. This is not to say that Ahuizotl doesn't have any new tricks up its collective proverbial sleeve. We've had a secret listen to another album track, "I Wanna Be Ignored," an ambitious, eight-minute pop suite that finds the band pushing at the boundaries of its sound in exciting ways. Looking at the 10-song track listing for Integrity Is Overrated, it appears two tunes from Lice also made the cut for the new collection, "Slide" and "Self-Made." All of which adds up to our being very stoked to hear the new set. Stream "Movie" via the embed below, and we'll make certain to alert readers when pre-orders begin for Integrity Is Overrated.

>> While many shoegaze fans hold the synthetic and textured sounds of landmark records such as My Bloody Valentine's Loveless and Slowdive's Souvlaki to be the highest ideal (and justifiably so), this reviewer prefers his dream-pop to work in the scrappier, home-grown vein. The smashing new single from New Orleans five-piece Glish hits right in that mythical sweet spot and is one of the best tracks of its kind to arrive this year. "Stu Hunkington," from the quintet's debut self-titled full-length out on Texas Is Funny Nov. 4, is an exercise in punky, whammy-bar delirium. The tune operates in a joyous, full-bore manner the likes of which have not been heard since perphaps the Swirlies' colossal 1993 full-length album Blonder Tongue Audio Baton (the actual pinnacle of the genre -- wink). Opening with a choppy, oblong two-chord riff, the song launches into a whirlwind of hardcore-influenced drumming, close-but-far vocal harmonies and a clean drum production style geared more toward capturing Glish's house show-styled combustibility more than any attempt at a delicate, dream-like environment. The best part of "Stu Hunkington," though, is surely what's going on in the left speaker. There, the lead guitarist's squealing and squelching lead notes not only drive the composition, but they inject just the right amount of chaotic danger to offset the open-vowel singing and skyrocketing kit. Think of it as a lone, unpredictable gale force wind interrupting the serene drift of a high-altitude balloon. Watch the Texas Is Funny digital storefront here for details on how to order Glish, as those details certainly should be cropping up soon. Stream "Stu Hunkington" via the embed below. -- Edward Charlton

>> We're pretty dang excited for the debut full-length from Ultimate Painting, the London superlative-earning duo of Jack Cooper from Mazes and James Hoare of pace-setting pop heroes Veronica Falls. The pair recently shared a new track from their upcoming self-titled debut, which is due Oct. 28 via the wonderful Trouble In Mind records. That new song, "Winter In Your Heart," provides still further evidence that Ultimate Painting's album will be a real gem. While there is really nothing new to add to our prior report beyond this new tune, we felt compelled enough by its gentle, breezy savoir faire to highlight it for our readers. Similar to what we said about the Ultimate Painting's title track in July, "Winter In Your Heart" explores the group's keen grasp of Velvet Underground-styled pop dynamics. Indeed, "Winter" has the same pure, undiluted warmth that makes the VU's self-titled third album such a timeless treat. It also sticks closely to a formalist song structure, while the up-close texture to the guitars (you can see the strings) and the simple, assured backing vocals lend the song a communal, happily-stoned jam-session vibe that eschews the seriousness of a lot of contemporary indie music. Keep your eyes peeled for the album pre-order details here, and we'll promise to do the same. While you wait, stream the terrific cut "Winter In Your Heart" via the embed below. Incidentally, we're growing impatient for news of new music from Veronica Falls, whose outstanding Waiting For Something To Happen was one of our favorite records of 2013. Here's hoping that, after the Ultimate Painting album cycle is complete, it is not a long wait for news of something new from Veronica Falls. -- Edward Charlton

>> Gdansk, Poland's Enchanted Hunters recently issued to the wilds of the Interzizzles its Little Crushes EP, an exotic, loungy indie-pop offering that sits just right as the lazy days of summers reach a final, comforting end, martini in hand. The four-piece is following up 2012's Peoria album with the new collection, which showcases a unique, woodsy spin on very European music. The tune "Hel" juxtaposes brushed drums with faraway, reverberated finger slides and a wordless vocal melody. Enchanted Hunters go all-in at the end of the track, too, when some unexpected jazz flute closes out the charming piece. EP highlight "Topiellica" makes room for chorused electric guitar, which glides underneath the gorgeous (and presumably Polish-language) layered vocal melodies. The combined effect transports one to a back alley jazz club, as if led by the hand of Bjork or Stereolab's Laetitia Sadier. As with the aforementioned Stereolab, Enchanted Hunters dwell on -- even delve into -- the little details, such as the watery, synthesized strings that play about during the verses of that song. Opener "Sonny" relies on the patterns and figures of various non-percussive instruments to anchor catchy vocals, culminating in a breezy sing-along during the final 30 seconds. It's in moments like these, it becomes apparent that the band is confident enough in its songcraft to not only be mindful of such subtleties, but also keep listeners intrigued throughout all of Little Crushes. Listen to the entire EP below, and buy it right here. -- Edward Charlton