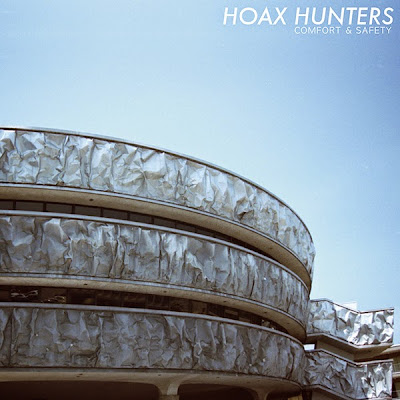 Hoax Hunters has been a fixture slowly rising up from the RVA scene for several years; it released a split single with Richmond dream-pop luminaries The Snowy Owls in early 2013. Long before the creation of the band, fronter and guitarist P.J. Sykes built a reputation as a go-to music photographer, relentlessly and selflessly documenting the local indie rock scene, and having work featured in Spin Magazine, Rolling Stone, The Washington Post and elsewhere. Mr. Sykes has also contributed photographs to a slew of highly regarded albums from Clicky Clicky faves including legends Superchunk and Versus. Unsurprisingly, Sykes' connected-ness within the mid-Atlantic music scene is the source of one of Comfort & Safety's strongest, defining traits: his love for currently overlooked post-hardcore standard-bearers from the mid-to-late-'80s Dischord stable -- groups like Rites of Spring, Gray Matter, Three and early Fugazi -- is reflected in his songwriting. These aforementioned bands moved punk into broader, more melodic, "mathy," and noisy territory, and to this reviewer their contributions at times seem overshadowed by trendier names and louder personalities. Hoax Hunters, however, honors these deeper and deeply important roots of the American underground, and casts their sounds and ideals within a modern framework, much like contemporary beloved and buzzed smashers Metz and Hausu.

Hoax Hunters' connection to The Snowy Owls is also illuminating. While far from a shoegazer outfit, Sykes and co. interestingly mix the vocals quite low, a move that emphasizes the shifting lead and rhythm patterns, which come courtesy of The Snowy Owls' drummer James O'Neill. Mr. O'Neill's drums bash loudly, and his great tom work is heavily foregrounded on Hoax Hunters' buzz-sawing rocker "Volume" and its tense thriller "Riskless Business." Clever studio trickery throughout injects interesting depth and dimension to Comfort & Safety and varies from song to song. Single "Breathe" utilizes swirling flange and panning in its opening moments to tasteful effect, and Sykes' various vocal filters here and elsewhere supply a subtly grit to the proceedings. Like many classic albums, these production methods give Hoax Hunters' debut a kineticism that accretes across the record toward album highlight and de facto closer "Erase." The standout track -- which apparently features "homemade electric dulcitar" from a guest player -- combines an experimental sound-collage introduction, a quick-burning hardcore song, and an extended, searing coda (which talks the listener down from the intensity of the previous numbers) to create what is perhaps Hoax Hunters most compelling composition to date. The chorus' dynamic, shout-along chant channels both the rage and joy that these guys bring to their music. "You. Can. Not. Erase," Sykes proclaims -- the final declaration that the hard work and values of those within a scene will live on, again and again.

Comfort & Safety was released last week on vinyl and as a digital download (sorry, no CDs, retro futurists!). Raleigh's Negative Fun is selling the LP (the very first to be offered by the label), and it is for sale right here. Richmond-based Cherub Records is handling the digital download sales, and if that is more to your taste, this is where you want to be. Stream the entire set via the Bandcamp embed below. -- Edward Charlton