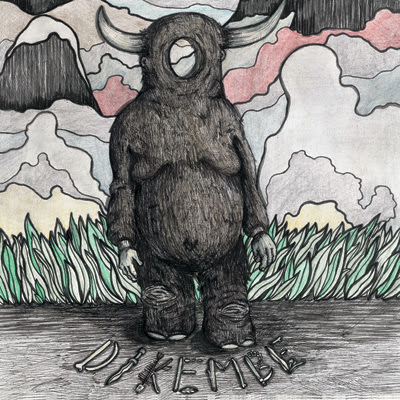 First impressions can be tricky. Dikembe's debut EP Chicago Bowls, our introduction to the Florida-based emo foursome, memorably rechristened certain stars of the fabled mid-'90s Chicago Bulls championship squads with weed-related surnames, and -- to our knowledge -- the songs had little to do the EP's quasi-theme. That thematic dissonance detracted hardly at all from the music's inherent quality, and so the short stack helped establish the act as one to watch in the underground. The ensuing first full-length Broad Shoulders [review] followed a similar sonic template but eschewed the goofball song-naming scheme, to thrilling results, although Dikembe now bemoans what it calls a lack of cohesiveness to the set. And so, with its titanic second full-length Mediumship, the band aimed to craft a front-to-back, real-deal album, one that felt of a piece all the way through. The record is a resounding success.

The LP's book-ending tracks provide a tidy framework for the triumphant collection. "Even Bother" and its counterpart, the towering album highlight and closer "Throw Lips," each commence solemnly, respirated by sparsely strummed guitar and fronter Steven Gray's world-weary vocals. By midsong Gray and Co. are reeling, firing in all directions while propounding a propulsive beat amid the din. While the two songs rely on similar dynamics and structural elements, the latter is hardly a retread of the former, as the amazing chorus of "Throw Lips" touts brilliantly overlapping vocal lines. But both songs are among the heaviest hitters on an album replete with bangers. Sure, dynamic songwriting is hardly a new development for Dikembe -- indeed, they routinely cover loudQUIETloud standard bearers Pixies in their live sets, as they did again this past Sunday at Great Scott in Boston -- but the Floridians have never before wielded their guitar attack with such devastating focus.

A re-recorded version of early Dikembe track "Donuts In A Six Speed," which sits in the final third of Mediumship, provides an interesting benchmark for analyzing how far the band has come. The original recording, from a four-way split released by Count Your Lucky Stars, feels two-dimensional when contrasted with the new version. On Mediumship, and especially live, Dikembe's explosive performance creates space in which the guitars feel especially cutting, the fill-heavy drumwork from David Bell particularly vital.

Indeed, in a live setting the band's sharp shifts in volume and tone transpire with twice the intensity. The band opened its show Sunday with Mediumship's gritty lead single "Hood Rat Messiah;" the tune's steady build to its shout-along chorus neatly distills the sound that characterizes the entire new record. The show ended with the Pixies' "Where Is My Mind?", but not before graciously dipping into the aforementioned back catalog, all of which elicited appreciative cheers from the assembled throng. The performances were terrific, but hearing cuts from Mediumship within the context of favorites from Chicago Bowls and Broad Shoulders made plain just how much the band has elevated its game with the new collection. Mediumship was released by Tiny Engines earlier this week on 12" vinyl and as a digital download, both of which can be purchased right here. The entire record can be streamed via the Soundcloud embed below. -- Dillon Riley