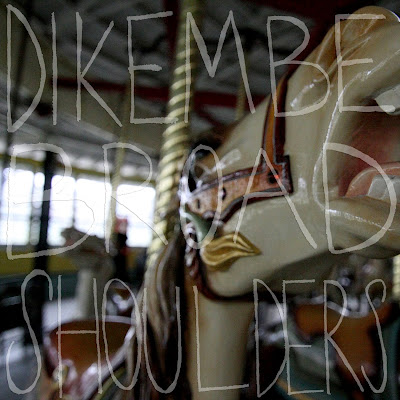 The emo and punk scene in Gainesville, Florida has been vibrant for so very long that this blog's executive editor lost a bass player to the lure of the student mecca some 12 years ago. Dude left BOSTON -- Piebald's Boston, The Wicked Farleys' Boston -- to go to Gainesville; this really happened. Anyway, based on the strength of the debut full-length from the southern city's latest export, Gainesville's gravitational pull on the perennial population of earnest indie and hardcore kids is likely to grow yet stronger as people inevitably turn on to the brilliant emo foursome Dikembe. The fiery quartet's new album Broad Shoulders, released Tuesday by Tiny Engines (a small label whose A&R is uneffwithable), is crammed with melodic, gritty anthems concerned with the regrets and resignations that accompany coming of age. Channeled through a textural, two-guitar attack and nailed down by a charged rhythm section that pounds time to the band's punk heart, the 10 songs on Broad Shoulders crackle with energy as intensely as they ache with honest sentiment.

The collection's comfort zone is the heads-down punk boogie of jams like "Apology Not Fucking Accepted" and the ode to Gainesville "We Could Become River Rats," but Dikembe's playing is so dextrous and songwriting so well-developed that Broad Shoulders is free of tired punk and emo tropes. The scritchy guitar tone and mournful repetition of album highlight "Not Today, Angel" recalls very early Portastatic, but the rhythm section breathes a glow onto the ballad's slow burn. Melodic guitar leads arc above gathering clouds of feedback while fronter Steven Gray murmurs his incantation, his wishing away of his corroded relationship with his dad; the chorus is buttressed by a curious, canned beat buried among the song's soft, blanket-like folds. "Not Today, Angel" is a small moment of stillness on a record that otherwise shakes with energy. The relentlessly propulsive groove of "I Watch A Lot Of Jackie Chan Movies" -- which feels like it could crescendo at any moment, but just ends up eating its own tail -- echoes slithering grinds similar to those turned out these days by Western, Mass.-based indie heroes Speedy Ortiz. Stream "Jackie Chan" and a few other selections from the album via the Soundcloud embed below.

Broad Shoulders is clearly excellent on its own merits, but it is especially gratifying for those of us still lamenting the demise of late, great Brooklyn indie punks Meneguar, who quietly called it quits in 2008 after releasing its third record, the fairly weird The In Hour (the debut I Was Born At Night and 2007's Strangers In Our House, however, are stone-cold classics). So to Meneguar fans we say, "have no fear, your ship has finally come in." Broad Shoulders was released Aug. 14 on limited edition 12" and digital download and is available for purchase right here. The vinyl comes in an edition of 500 pieces, 100 of which are clear "with blue smoke," 150 dark orange and 250 light brown. Dikembe's long player was preceded by the free, digital-only EP Chicago Bowls, which was released in 2011 and is still available for free download right here.