Review: Bedroom Eyes | What Are You Wrong With 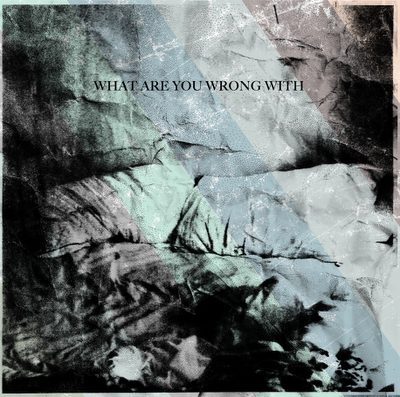 Dense, bending chords, drifting vocals and desperate rhythms drive the terrific recent long-player from Boston shoegaze luminaries Bedroom Eyes. The collection, self-released by the quartet July 9, entices with its big melodies, superfuzzed guitars and bass and healthy blasts of feedback and static. All of which make What Are You Wrong With the record we've waited a long time to hear a Boston band make, a kind of golden mean between Dinosaur Jr's Bug and My Bloody Valentine's Isn't Anything. And despite only recently locating the second half of the band to the city and having a very short life span to date, Bedroom Eyes' biting blend of shoegaze and punk is presently among the most intense and captivating in the Boston underground.

The buzz-sawing verses of opener and album highlight "Garmonbozia" pump fuzz-bass sunshine under radiant, shimmering guitars, each verse building to a glorious cacophony in the chorus. As with the entire album, everything is limned with a rich sonic grit. Indeed, What Are You Wrong With succeeds as much because of its rough edges as it does for its uncannily memorable melodies. All sounds are gratifyingly loud and sent to tape that way, allowing the music to smash up against the stereo field in a manner that approximates both the listener being "there" live, caught in the swirl, and one of the more memorable moments of "Kentucky Fried Movie" (for a young teen-aged boy, anyway). The production allows the recordings to shudder with a barely contained energy, bringing to bear Bedroom Eyes' Allston basement show cred in a deliciously visceral way.

Even before it released this long-player, it was already a big year for Bedroom Eyes. The band was named the best underground act in New Hampshire, even when half its members had already made the jump to Boston. What the cognoscenti knew was there was no reason to expect a let-down, as Bedroom Eyes had already unleashed on an eager public of early adopters a tantalizing clutch of excellent demos and compilation tracks, including iterations of "Big Boo," "Soggy," and a thrilling cover of Ride's "In A Different Place" on Clicky Clicky's Nofuckingwhere compilation (still available for free download here).

What Are You Wrong With strongly delivers on the promise of those early tracks, while offering new insights into the rapidly rising band. Songs such as "Weak Back" and "Dissipate" evidence Bedroom Eyes allowing itself to work odd grooves and explore sound and space outside the constraints of verse-chorus-verse inevitability. The blunt-force of the wall of guitar and desperate rhythmic intensity of the former track builds and then breaks down, settling into a quiet lumbering groove of fuzz bass and edgeless feedback that provides perhaps the most satisfying and beautifully pure moments on the record. "Touch Of Sap" has verses that sway and bend, and a pummelling chorus that recalls scene-legends Swirlies. What Are You Wrong With has no filler, just lots of killer. Buy it on CD or as a digital download via the Bandcamp embed below. As we reported here last month, the foursome is already at work on a follow-up, an EP to be released on cassette; we'll keep you posted.