Show Us Yours #10: Calories 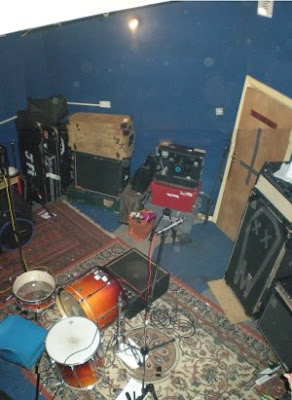 One of our resolutions for 2009 was to revive our old Show Us Yours feature, via which we pay virtual visits to the practice spaces of some of our favorite indie rock acts. You probably haven't even heard of the feature, because the last one we did was in July 2007. But now it's back, and we're excited to relaunch with a tenth episode featuring Birmingham, England-based indie trio Calories. Close readers of the blog will recall how we bemoaned here discovering the band Distophia after it had already folded. Well, fortunately some of the guys stayed together and forged the new act Calories. The trio plays aggressive but melodic indie rock, and they play it well. So well in fact that they have been picked up by the London-based label Small Town America, which will issue Calories' debut long-player Adventuring March 2. So we decided it was high time to check in with the act. We pitched our battery of questions to Calories guitarist John Biggs, and what we got back is posted below.

We're especially grateful to Calories because they have allowed us to offer a taste of the new record via the embedded Imeem player below. Attentive photo viewers may notice a clue or two as to which prominent indie act Calories shares its space with. The band plays in Oxford, England tomorrow night with Instruments, and you can inspect details regarding additional pending Calories live engagements here. Anyway, take it away Mr. Biggs.

Why do you use this space?

It was cheap, secure, damp-proof and made me think of Hell. Euronymous from Mayhem would have loved it here. We also needed a place store all of our equipment and write.

Explain why everyone stands where they stand, or why one spot in the space is the suckiest spot.

I like to stand so that I can see the lads and make sure they are safe from harm. If they start to slack off a bit I give them an evil eye.

You walk into your space. What's the first thing you smell? Why?

The smell of dark and the smell of fear. There are no lights on the first floor to the building so we use a torch to light the way. Once we are through the first gate we enter zone one which is next to the toilet. Surprisingly there are both a ladies and a gents toilet; I always use the ladies as it feels cleaner. A few strip lights illuminate zone one but they flicker like they might in an old horror film. The smell on this floor is the smell of dust and cold. We then enter door one to the 'Corridor of Shadows.' There is absolute silence in this corridor; sometimes the alarm might sound but not always. There is something not quite right about this place... something elusive... something slightly queer... ARRRH!!! Tom jumps out on us!! We laugh nervously and fumble for the key. We lock ourselves in away from the dark and away from the demons... for now...

There are suddenly four people in your photo at MySpace. Was one of you cloned?

The guy in the photo is Steven Ingram. He was in our 'lost' band Antlers. We wrote a collection of songs with dear old Steve. We recorded four together in a day at a London studio. We are releasing these on a bonus CD you can purchase from our label STA. Steve is also our art director.

I know you finished recording the forthcoming full-length Adventuring last year, which comes out in March. What else will the next six months bring for Calories?

We are planning to release the album Adventuring on STA which has a release date of 2nd March 2009. We are also going back into the studio sometime this year to record our next full length record and also our first in a collection of EPs called Installations. We want these to be exclusively limited on vinyl with some sexy artwork.