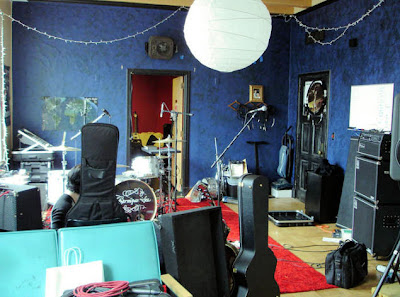 [After a several-month hiatus, our Show Us Yours feature returns. Links to prior episodes are at the bottom of the piece. -- Ed.]

When we were coming of age, Portland, Oregon was known to us (incorrectly, as it turns out -- thanks for the comment, Potatoes! Sorry Mr. Tate, et al.) as the home of mind-incriminating rockers Queensryche. But in the last decade or so -- as the musical underground clawed its way toward the mainstream, and as the mainstream plummeted toward the offensive mediocrity of the lowest common denominator (babes x beer = party) -- indie bands in Portland have distinguished themselves. Nowadays Decemberists, Dandy Warhols and Quasi are household names among most indie fans. The Portland scene supports a diversity of styles, and its premiere dream pop band may very well be Charmparticles.

Currently a trio that fuses the best parts of acts like Starflyer 59 and The Cranberries into a single, focused package while remaining loyal to its shoegazing roots, Charmparticles has just self-released its slightly foreboding ("Rarest Numbers," "Battersea"), sometimes aggressive ("Get Your Complex On") sophomore set, Alive In The Hot Spell. This spring we discovered the five-year old band while streaming music via Pandora. Entranced by the sounds of the bending guitar chords on one of its earlier tunes, we checked in with bassist and vocalist Pamela Rooney to see where the band does what it does for this edition of our voyeuristic, practice-space fixated feature Show Us Yours. What we learned is that cement can't protect you from either the heat or the cold; that Charmparticles' song writing has changed over time; and that angel-voiced Rooney doesn't believe in ghosts.

1. Why did you choose/why do you use this space?

We had another space in the same building that was a small and lightless box. When this one came up for rent we grabbed it. It's got decent views of downtown and windows that open. Very important in the summer, very crappy in the winter.

2. Explain how an idiosyncrasy or quirk of this space or a former practice space has affected a song, or even your overall sound.

The whole building is the former headquarters of the Oregon Portland Cement Company. It's an old building and made entirely of (you guessed it) cement. It's blazing in the summer and frozen in the winter, so we've spent many nights either bathed in our own sweat or exhaling streams of steam. Summer and winter practices are often made as short and productive as possible for this reason. There's a rumor that the place houses plenty of ghosts of workers who died with lungs full of concrete dust. I'm not so much one that goes for ghosty stuff, but it's a creepy building and we've freaked ourself out a couple of times when loading our equipment in after a show. Eerie. Creepy.

Dust and beer. It's dusty and there are plenty of empty beer cans.

4. It's been three years since your last EP, and it was two years between The Scenic EP and Sit Down For Staying. Despite the pauses between releases, many of the band's stylistic elements have remained constant. What are the biggest changes between the band that wrote that first EP and the band that wrote Alive In The Hot Spell?

The easiest changes to identify are those of line-up. There were four of us and a different drummer for The Scenic EP, then a new drummer for Sit Down For Staying, and then we lost a guitarist for Alive In The Hot Spell. The songwriting process was completely restructured for this last record, and I think in the years between Scenic and AITHS, we've just found ourselves a little more, both musically and personally. We're a little more focused and a little more easygoing now than we have been, and when we finally took some pressure off of ourselves, songs started rolling in. BUT, we still love reverb and delay, so those elements will probably make us sound sonically like us for a time to come.

5. We discovered your band via the Internet radio service Pandora. With the threat of a new royalty scheme being enacted and destroying Internet radio as we've known it, we were wondering if you have any thoughts on how its potential demise will affect Charmparticles?

Yes, I have plenty of them. I feel pretty certain that Pandora and SomaFM (and plenty of other stations) have broadcast our music to a broader audience than we could have ever hoped to with day jobs. I get a few emails a week from people that have heard us on Pandora or Soma. I don't mean to state the obvious, but it can stand the emphasis: The internet as a free and available communication medium has been a boon to so many independent musicians/writers/artists (and independent music in general) that watching it become yet another outlet available to only those with abundant resources is utterly heartbreaking. I really did think it would stay good.

6. What do the next six months look like for your band?

We'll be having a little tour here, a little songwriting there (once the space cools down!). Generally flying by the seats of our pants until we settle down long enough to record again.

Charmparticles' Alive In The Hot Spell was released June 29. You can buy it at CDBaby right here, or stream cuts at the band's Virb page here or MySpace dojo linked below. Below that are listings for three shows the band has booked for next month.

For what it's worth, Queensryche was from Bellevue, WA.

2) Doh! Goes to show what I knew about Queensryche when I was 12. I'll add a correction tonight.