Johnny Foreigner's 13 Point Plan To Destroy Etc. And So On 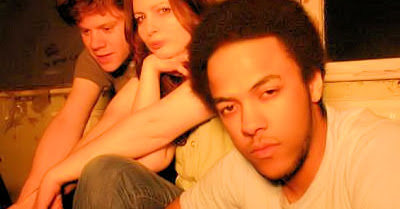 [Another week, another update about Johnny Foreigner... it's getting to the point where we are half-considering setting up a separate blog just to cover them, with a wacky name like "A+ No. 1 Super Fun Time Johnny Foreigner Fan Club USA Blog." But on to the news... -- Ed.]

There's almost imperceptible buzz around the Internets that superhuman Birmingham, UK-based noise pop trio Johnny Foreigner is considering at least one record deal. Not much of a surprise, really. We'll let you know how that shakes out. In the meantime, you should really click this link and wade through some hipster ranting on the part of a well-meaning host to get at a mind-bending live clip of Johnny Foreigner performing for the Road To V competition we've written about previously here. The band blitzes through a version of "SofaCore," dangles it a bit in the middle for some skull-mopping, and then brings the tune to its merry conclusion. We wish there was more high-quality live video such as this of the band to be had, but if this label deal thing happens we expect there will be plenty. Anyway, the funniest part of the pre-show interview bit is when the host asks the band why they should win the contest and bass player Kelly blurts out "we shouldn't." Brilliant.

We'd be remiss if we didn't mention that scads of Johnny Foreigner demos (many of which the band has been giving away at its web site for some time) have been packaged up as a 15-song, digital collection of sorts entitled I Like You Mostly Later At Never. You can download it here. For those of you keeping score at home: missing from the collection, based on our thorough record-keeping, is the great (if a little sketchily recorded) track "KickKickKick," but included are two tunes of which we were not previously familiar, "Champagne Girls We Used To Know" and "This End. As A Beginning." Also, the versions of "Yes! You Talk Too Fast," "Balance Comma Girl" and "Ninky vs. Dingle" sound like different mixes (in the case of the first two) or a different edit (in the case of the last one, a Sunset Cinema Club cover). Finally, because we are in a giving mood, here is our current JoFo fave, "All Mosely Gardens," as well as the aforementioned "KickKickKick."

If yo uwern't so dam sweet id have a court injunction against you! :D

Aaa, I came by the info honestly :) plus, their success shouldn't be a surprise to anybody paying attention. Cheers. -- JCB