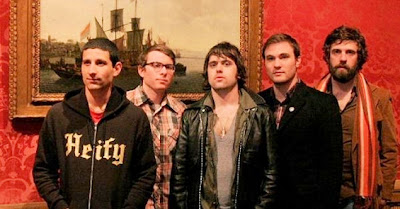 >> Word on the street, or at the least at the bottom of this blog post, is that Philadelphia indie rock phenoms The A-Sides will tour extensively in October. Vagrant will issue the band's sophomore set Silver Storms Aug. 28. Well, actually, Spin.com today says here that the set will now be issued Sept. 18, as does the band's web dojo; not so much their Virb page. Things change. Incidentally, Spin.com, which named The A-Sides their band of the day today, thinks the band sounds like The Shins and Modest Mouse. Uh, what? Either way, make sure to hit that link to Spin.com supra and grab the MP3 for the newish track "Diamonds." Speaking of The A-Sides, we'd never seen this live footage of the band playing "Cinematic" last January at Philadelphia's 700 Bar. The A-Sides are in Boston at the Middle East Aug. 9. We'll be there.

>> This new video for Broken Social Scenemeister Kevin Drew's "Backed Out On The..." that features J., Murph and Lou from Dinosaur Jr. is getting a huge !!hell yeah!! from us (note the crazy exclamation points for added jazz). Pitchfork has the video posted right here. Drew releases his inelegantly titled solo set Broken Social Scene Presents: Kevin Drew, "Spirit If..." Sept. 18 on Arts & Crafts.

>> Pop-punk supergroup Armalite, which features Atom Goren of Atom And His Package and a bunch of other famous-type Jersey hardcore kids, doesn't want you to forget that they are playing a rare live show Aug. 10. at the First Unitarian Church in Philadelphia. So don't. Armalite's self-titled debut was one of our favorite records of 2006; we had occasion to dine with Mr. Goren in May and he said there are currently no plans for a second Armalite set, as the guys are all busy with other things. So this show is as good as you're gonna get. Someone please take video. And here are some MP3s:

>> Merge Blog has just posted here two acoustic cuts from Swede pop sensations Shout Out Louds. One of the cuts is the infectious bouncer "Tonight I Have Leave It," which we wrote about here a couple weeks back. The other is called "Impossible." Both songs were part of a radio session recorded by LA-based commercial rock station Indie 103. We can't get either of the files to open, but perhaps if you check back later the Merge web gremlins will figure out what the problem is.

>> Fun fact from a recent Brian Baker interview that Pun Canoes links to here: apparently DC hardcore legends Minor Threat have sold between 800,000 records and a million records over the last quarter century or so, according to Mr. Baker's estimate. Not too shabby for guys who have never once cowtowed to The Man. We salute you, Minor Threat.

Yeah philly. Nothing better then philly love in Boston.

Merge also has the full Caribou album streaming right now and he'll also be in Boston in October, opening for Born Ruffians.

I'm all about the Philly love. Grew up there (well, R5-Land) and lived there and in the city until '99.