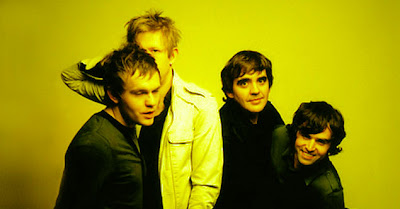 >> Have you been saving your shekels (or Koomzles) for the big new release day tomorrow? We'll likely step out for the new Interpol set, hoping that Newbury Comics is offering it at a good discount. In our estimation, however, the biggest release is the new Spoon set, Ga Ga Ga Ga Ga, which we've been listening to daily since the promo arrived. A truly superlative effort, wall-to-wall, song for song, with typically tight, deconstructed pop songs and really engaging production. Our pre-order arrived Saturday. It was packaged with the bonus disc Get Nice, which we can report is almost as forgettable as Ga Ga Ga Ga Ga is unforgettable (sorry guys). It's certainly an interesting listen, but the only track we imagine we'll be returning to is the demo version of "You Got Yr. Cherry Bomb." Anyway, as far as other new releases, we imagine we'll grab the new Buffalo Tom after reading a lot of good things, and maybe the new They Might Be Giants because it was produced by Jon Brion and is supposedly a bit of a rock record. And that'll be that.

>> Pre-orders are now being taken for Glen Friedman's very promising book of Fugazi photos titled "Keep Your Eyes Open." The hardcover streets Sept. 3, costs $30 and includes about 200 images spread across 112 pages. Perhaps equally as exciting is noted raconteur and former Nation Of Ulysses and Make Up fronter Ian Svenonious has penned a 6,000-word essay included in the book. There's more info here.

>> Although the news broke last week, we feel it is worth noting that superlative second-wave emo giants Christie Front Drive will reunite for a single, all-ages performance Sept. 1 at DenverFest III. Needless to say, kids on the message boards are going nuts, and prepping for long drives. The Denver-based quartet broke up in 1998. Its split 10" with Boys Life, released on Crank! in April 1996, is among the best 10" records ever released. The record is out of print -- not sure if that goes for the CD version we picked up several years ago, too. But in the event you've never heard Christie Front Drive, this is our favorite jam of theirs, as we'll throw in Boys Life's obliterating "Two Wheeled Train" from the flipside to boot:

>> A local note for Bostonians. After an interminable renovation, one-time dive live venue O'Brien's in Allston Rock City is set to re-open. The only venue we've ever played at twice. More details at The Phoenix here.
Posted by Unknown at 7/09/2007 09:53:00 PM