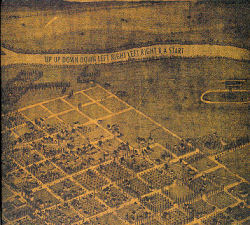 New Jersey's finest angular pop band returns with a full-length tour de force long on brains and hooks and as lean as anything that notably tight-riffed rock act Spoon has issued. And here again we find, as always, small anthems -- songs that wave their flag vigorously but refuse to show off with extraneous verses and choruses when one of each, at most two, will do. Earlier Up Up Down Down Left Right Left Right B A Start tunes such as the 86-second masterpiece"Please Come To Me" [video] from Perris, CA have crescendoes that explode like a tray of wine glasses striking the floor; the fist-pumping 2001 cover of Straight To The Point's "Straight To The Point" borders on screamo. In contrast, the exquisitely produced and hilariously titled collection Worst Band Name Ever features ten tracks that further the band's trend toward a gentler sound. Acoustic guitars play primary roles in the characteristically wistful "Gas Station Hair" and the lighter-than-air "I Am The Island." Piano steps to the fore in the nostalgia-drenched (again, characteristically) "Christmas Eve 1993."

Even so, the record -- UUDDLRLRBAS's second full-length and eighth release, depending on what and how you count -- is not an entirely softer affair. The denouement of "Am I A Cricket?" desperately slams as songwriter and singer Steve Poponi professes "I swore there'd be no complications / but part of my plan was to not have a plan." The song's slithering electric guitars plunge into silence at the far side of its 3:25 seconds, a track length that is several lifetimes in the microscopic world of Mr. Poponi's amazing songcraft, which continues to be perpetually, but not unpleasantly, trapped in a bygone suburban life fraught with relationship trials. "Boise" has a hollered chorus with chugging distorted guitars. Also locked in high gear is "128 Cayuga," a series of melodic spasms pilled-up on snare drums and guitars that chime, pulse and then inexorably chime again. Worst band name ever? Does it matter if your band is among the best American indie rock bands currently working?

We're posting a couple MP3s below (the same we posted right before we went on vacation last month -- consider this your second chance). In addition, the band has several increasingly rare live performances slated for later this month. Sadly, none are in Boston, but we hold out hope they will book more dates; the current dates are below.

Email ThisBlogThis!Share to TwitterShare to FacebookShare to Pinterest
Labels: Spoon, Straight To The Point, Up Up Down Down