Show Us Yours #17: Golden Gurls [PHOTOS: P. McCracken] We keep in close contact with Golden Gurls fronter Andrew Mabry because the dude is funny, smart and opinionated. Also, his band is great. You might recall Clicky Clicky's wide-ranging interview with Mr. Mabry that we posted on the eve of Golden Gurls' first Boston show last September. And that we were pretty excited to see the trio's debut full-length Typo Magic get picked up for a limited edition release in the U.K. earlier this year. The gals (awww Mabry's gonna hate that...), who we're gonna go ahead and call Baltimore's best guitar band, have been hard at work on a second record and are hodge-podging together some late summer tour dates with Sooyoung Park's new project Bored Spies, so we thought it was high time to get the band back on the record to give some accounting of how they've been spending their time. We proposed to Mabry that perhaps he'd care to submit to our recently resuscitated interrogations about practice spaces, Show Us Yours. Mabry graciously agreed, and below he shows us around his rock dojo and surrounding environs, and offers more details about how the rest of the band's year is shaping up. Let's jump in, shall we?

Clicky Clicky: So why do you use this space, or how did it come to pass that this was the one that you settled on? Or maybe this space is a catch, and people think it's too cool for you?

Andrew Mabry: When we started this band, I was already using the current space for another band I had called Left Channels, it's actually just my basement. For some reason my neighbors don't seem to be affected by our noise; then again, I soundproofed most of it to the point of it just being a loud hum you can hear sometimes. I also live on a block were about five other bands practice, and most of them are a lot more to take in than we are, be it dirge or metal or Sunday gospel jammers going on for four or five hours straight, I think the people around are just used to it always happening.

AM: On our demos we definitely used the quirks of this space. I recorded vocals in the bathroom in the basement which has awesome '50s style wallpaper -- you can get lost in that wallpaper for real. The ceilings [in the basement] aren't very high, so you have to record the drums mic'd really close, etc., it makes for some strange home recordings. The entire space is also wood paneling, remember that stuff? I always had a love/hate relationship with paneling. We wind up having to use a lot of early '60s recording techniques on demos in order to catch everything we're trying to catch, [because of] guitars get lost and the bass getting farty, but the drums come out crystal clear, almost decent recording quality.

CC: You walk into your space. What's the first thing that you smell? Why won't that smell go away? 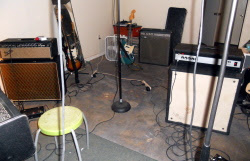 AM: I suppose you smell musty air and stale beer. We drink a lot of beer at practice. Our drummer never finishes his beers, it seems he likes to make the clean-up difficult. The best is when they get super moldy like science projects. I love that. Also there seems to be a constant smell of drummer, drummers know what that smell is, it's a weird smell that never goes away. It's sort of like a soda stain on concrete or a spirit haunting one room in your house.

CC: I thought Typo Magic was amazing. A bunch of our favorite Boston indie rock-type friends thought it was amazing. You might have even thought it was OK. And yet -- like the majority of great indie rock bands -- you are not swimming in money and cars and whatever it is that people swim in these days in music videos. So I guess my questions are these: first, how do you define success for the band? And, second, what keeps that fire burning in you to keep writing songs and playing music despite the fact that Brooke Shields and Elizabeth Taylor never want to hang out and you don't have a pet monkey?

AM: Hahaha, well this is a seriously difficult question to answer: how does one define success in a band context? I look at bands like Speedy Ortiz, they are out there killing it everyday and working hard towards a goal, what it is I am not entirely sure, to me they are successful. Are we successful? I have no idea, I am just glad our stuff got out there and people are listening to it. The modern musical economy and the self-serving nature of youth culture really destroys all of the concepts of success -- from a musical business standpoint -- I had growing up. I think of bands like Fugazi and what they did in the '80s and '90s, no band in the modern era will ever be able to pull that off again.

At the same time it's apparent the measuring stick for all of that has had to change. What that is now is subject to a lot of debate, a few friends of mine and I argue this over and over again on my porch drinking beer all of the time, yet we always come out to a stalemate on it. Some people believe selling records is what matters, others will tell you it's getting people to listen to you at all... which is apparently a thing nowadays. I like to think back to the era when a record label was enough, like Matador or even Caroline Records, you would see they had something new out and just feel compelled to give it a listen at home, hence a purchase was made, because the Internet wasn't full of torrents and all of that stuff yet. 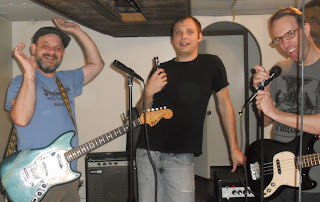 With Typo Magic I have tended to err on the latter side of the argument between record sales and just people listening, we just wanted to get it out there, financial compensation was never something we pondered. If we had a monkey that would be killer, I am guessing it would make it difficult for us to write new songs, though. My wife is more of a mini-pig fan, she wants us to buy one of those pretty badly which could become a solid band mascot with some training, I'd say. For what it's worth, I feel like Boston bands have the best scene period, and all of the bands whom we've ever interacted with there are amazing people. Infinity Girl, Speedy Ortiz, Soccer Mom, Young Adults, Boom Said Thunder, and Pile, just to mention a few, have been nothing but supportive and are all great people. As for Elizabeth Taylor, we often eat dinner under a picture of her at the corner bar by my house...

CC: You've got an album in the works -- what can you tell us about that? Damnably did a limited release of Typo Magic for England -- will they be involved with the next record? Do you plan to tour to support it? What do the next six months look like for the band?

We do have an album in the works, it's about 80% completed, all recorded at Magpie Cage studios (J. Robbins of Jawbox's studio) here in Baltimore, starting about about 3 months ago. I am not sure if Damnably will be involved with our next record's initial release, it very well may be the same scenario as with Typo Magic, we put that out ourselves and we will likely put out the 2nd album as well. We've been looking for a label in the States, but as of yet, nothing has really come to light. I can tell you this though, George at Damnably is one of the coolest people on the planet and he has done more for us in a few months than I think we were capable of doing ourselves in a full year. We plan to tour in support of the 2nd record assuredly, we are going on tour with Bored Spies in late August, well, it's in the works currently, as you and I have bantered about at great length. I think the next six months will see the release of a couple 7 inches and a 12 inch by us, we're mulling over what we'd like to do with our 2nd record a lot more in depth than the 1st record. I guess that's the difference between going into record for the 1st time haphazardly and taking the time to write the material for a 2nd release, as of the moment this will be 35 minutes long and more in depth, sonically speaking, than Typo Magic.

We thank Andrew and the gang for playing along for Show Us Yours #17, and encourage you to stream their excellent 2012 record Typo Magic via the fancy new Bandcamp embed below. For a complete gallery of Golden Gurls photos shot for this feature, hit this link.