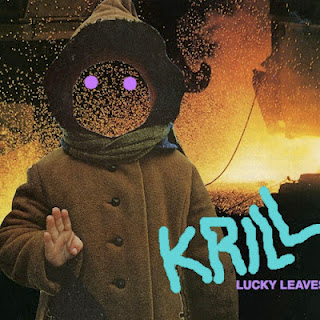 Some bands this year will release good records, and a very small number will release excellent ones. But Jamaica Plain, Mass.-based trio Krill has accomplished something exceedingly rare by fabricating -- in a breathtakingly brief 10 hours of studio time -- a whole and quirky sonic universe all its own. A universe that, we imagine, has the same fidelity to perspective and logic as an episode of "Ren & Stimpy." Indeed, the threesome's sophomore collection Lucky Leaves boasts 11 clever and patient compositions, but each is a crooked house of cards, each adheres to an off-world gravity tugging steadily on wiry and sparkling guitar lines, rubbery bass and drumming that approximates the collective cadence of a few wind-up toys running concurrently but intermittently. The sum of all this is a rock critic's dream record, one that boasts a singular world-view from a charming coterie, complete with smart-guy time signatures, syncopation and instrumental interplay, nuance and dynamics, all beholden to a masterful economy. While some bands succeed by doing a few things right, Krill surpasses whatever expectations anyone might have had by doing EVERYTHING right.

This is especially the case with the dub-tastic and twangy preview single "Never A Joke," a potent case study of the curious dynamics and the crackerjack performances that bless Lucky Leaves -- listen to the stumbling drum fill just past the two-and-a-half-minute mark, just prior to the guitar bluescreening into a cascading repetition that sucks the song right down the drain. That dub influence isn't always as explicit, but even so the power and kinecticism of Lucky Leaves is as much due to the wide and deep space left by the economical compositions as it is the clattering rhythm section and technicolor guitar melodies. And swooping over or looping through the airy mixes are the surprisingly direct and occasionally demented vocals of singer and bassist Jonah Furman, whose adenoidal delivery is given substantial weight by variations in tone and texture employed in rendering his losercore declamations. Mr. Furman's singing recalls that of Modest Mouse's Isaac Brock or Clap Your Hands Say Yeah!'s Alec Ounsworth, but Furman at this point is perhaps more relateable than the former and more believably unhinged than the latter. There is no effort to soften the loathing in the stark and harrowing lyrics to "Oppressor" ("...whenever I have a good time, I dismiss my suffering, I'm the oppressor...") or the irony of "Infinite Power" ("...if you wanna feel like a failure, that's your right..."). The latter is tempered somewhat by the follow-on and final track, the curiously content and centered acoustic reprise of the opener "Theme From Krill," but that contrast is perhaps the clearest example of Krill's greatest appeal, a wry but winking (if winking was coool...) humor.

Krill mark Monday's release of Lucky Leaves with a show at Great Scott in Boston Saturday; the bill includes Ava Luna (featuring Julian Fader and Carlos Hernandez, who recorded Krill's record at The Silent Barn in Brooklyn in February), SaraLee and Huge Face. All the details can be found at this Facebook event page; there's another release show in New York the prior night. The record was initially only available on a USB stick embedded in a ball of cheese, on a CD (150 ludicrously packaged in a 12" sleeve, because whatever forever) or as a digital download, but somewhere along the way some wise person ponied up money for Krill to press Lucky Leaves to vinyl. You can review all of your purchase options at the band's Bandcamp wigwam right here; know that there is now vinyl available in a limited edition of 350 units on "barfy"-colored media. In the meantime, click over to Noisey to stream the entire collection or hear the two preview cuts via the Bandcamp embed below.

Previously on Clicky Clicky:
Show Us Yours #16: Krill