By our reckoning we're less than three weeks away from living in a world where those in the know will be walking around town unable to stop themselves from singing "Krill, Krill, Krill forever" [and oh shit hare krsna, now there are these t-shirts, too]. Not because a new cult is taking hold in indie rock circles... or at least not the kind of cult that one usually associates with word "cult." No, that simple chant is the chorus to the opening and closing numbers from Boston indie trio Krill's triumphant sophomore set Lucky Leaves, which is being self-released June 24. The melodic and wiry music collected on the record flexes and breathes and is awesome in about two dozen different ways that we intend to tell you about in a more fulsome review later this month. But in the meantime we thought it would be a good idea to check in with the band to see where they do the things they do, to sort of gauge the environment in which its particularly curious aural alchemy transpires, to see where it makes the sizzle and the sparkle. Krill bassist and singer Jonah Furman -- whose voice careens powerfully between the blissed abandon of Alec Ounsworth and the dark desperation of Isaac Brock on Lucky Leaves -- kindly obliged our request, and in the exchange below goes into detail about why the band until very recently lived in a mansion vacated by a professional baseball player, which member of the band was theoretically in line to share a room with parrot named Shakespeare, and more than a few other fairly odd things. Read on, then gather yourself together enough to listen to two cracking songs from Lucky Leaves below.


Clicky Clicky: So we should make it clear, this episode of Show Us Yours is sort of a "ghost of Christmas past" episode, as we're talking about a practice space you just had to leave. Our usual lead-off question is "why did you choose this space?" But it was your basement, so that question isn't as interesting as this: how is it that the band came to live in a mansion that used to be owned by a professional baseball player? Because that is sort of weird.

Jonah Furman: OK, the basic thing that happened is we were on tour, and our friend found this mansion on Craigslist, and we all thought it was a scam but we were away and were like, "yeah, OK, whatever Dan," and then Dan went and they showed him the house and it was this crazy mansion and at no point did a scam happen, so I guess it wasn't a scam. The guy who owns it is a JP mansion slumlord who walks around with a parrot on his shoulder (named Shakespeare; incidentally Jonah's room was constructed as a room for the parrot when the slumlord moves in in 2 years). There was a man named Vicente Padilla living there, the first Nicaraguan MLB player, Sox pitcher, led the league in hit batters in 2006, for some reason went to Japan I think and left the lease so... and then here is where I get lost. Something about Japan making it cheap, so we got it for real cheap. Since we got to practice in the basement it was ultimately cheaper than most normal places. OK.

CC: Was there an idiosyncrasy or quirk of the space that affected one of your songs, or even your overall sound? 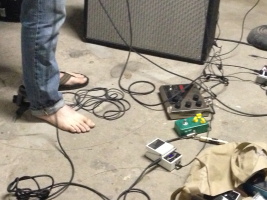 JF: As has always been the case for Krill, we don't have a PA or any nice gear or anything, so that at least has affected the vocals; we just put them through the second input on Aaron's guitar amp and Jonah tends to have to strain/scream to be heard during practice, which is a hard habit to break when you can actually hear the vocals. Also, a lot of songs were written in a parrot's room.

JF: [Our friend Adam] Schatz has this term 'gro-fi' which is, like, when lo-fi bands get a lil' nicer equipment and recording stuff. But the Silent Barn studio is still a very DIY spot, even though [friends and recording engineers] Carlos [Hernandez] and Julian [Fader] really know their shit. Since we were one of the first (I think the first full album?) bands to record there, it wasn't all that built-out yet, and was still pretty basement-y. The bass was all DI and the guitar amp was like across the room turned around and, I don't know, it wasn't like fancy studios. That was good for us, takes some getting used to being able to hear the music you're making.

CC: When it was still yours, when you walked into the basement, what was the first thing that you smelled?

JF: Hay. There were inexplicably many bags of hay at all times in the basement. Fusty hay.

CC: And so, as we alluded to above, you've had to move out of the mansion. Is there any sort of interesting story to why you had to move? How is the hunt going for a new practice space?

JF: The hunt is a horrid hunt. We're striking out left and right, please help us, we will pay menial fees. Move out was yesterday, they fucking threw away Luke's towel.

CC: What do the next six months look like for the band? Do you have it in you to do as grand a tour for the record coming on the 24th as the one you did last fall?

JF: We're goin' on a big tour in September, hitting lots of states we missed on the last national thing, like South Carolina and Texas and Tennessee and Alabama.

Here's the part where you listen to some great music, namely the two preview tracks from Krill's spectacular new record. First up is the lumbering rumination "Purity Of Heart," then wash that down with the more skeletal groover "Never A Joke." Both are time well spent.