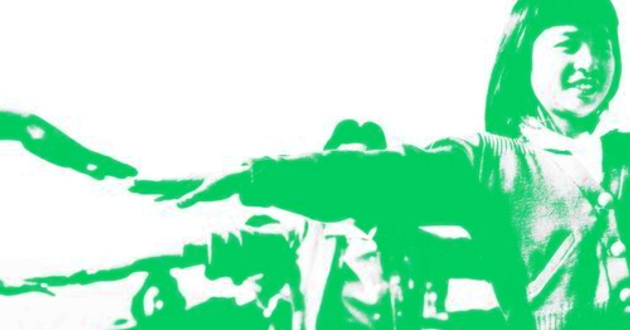 >> From its humble beginnings, the Slumberland Records catalog has always possessed a great spiritual unity, and an argument can be made that the revered label's aesthetic, as mapped by its recent output, is becoming more outwardly emotional and mature. It's in the remarkably affecting, folk-inspired rock of Withered Hand, and it's in the dazzling, exuberant new single "Simple And Sure" from The Pains Of Being Pure At Heart (who, strangely, are releasing the full-length that contains the single via a different label, Yebo). And it's also in the sparkling anthems of Atlanta-based guitar-pop giants Gold-Bears. That quintet's sophomore effort Dalliance will be released June 3 -- incidentally, the day after the band performs at Cambridge, Mass.'s Middlesex Lounge with local indie pop standouts Bent Shapes and shoegaze titans Soccer Mom [dee-tails]. As with another upcoming SLR band, The Proper Ornaments, Gold-Bears' two preview singles (the latest being the cascading, co-ed rush "Yeah, Tonight") draw from the '60s-influenced side of Slumberland's classic pop aesthetic, while pushing the emotion to the forefront in less usual ways. The first single "For You," is a step forward for Gold-Bears, particularly in terms of both audio fidelity and composition, when compared with the five-piece’s delightful 2011 debut. The song's impact is predicated on minimal, Ramones-inspired power chords and a thoughtful arrangement. What might at first seem a continuation of the band's frustrated, punk-ish yelp-pop in the tune's first half, though, shifts suddenly to a succession of refreshingly clear moments of triumph. At roughly the half-minute mark, a piano smartly lays a wedding-bell progression against the grind of the band, and emotionally flattens everything in the song's proverbial path. It's a simple move, but when that instrument counterbalances the fierce chord progression, it sets up a tight-throated rush that suddenly imbues aggressive lines like "You're a mistake" with a serious twist. Have you ever watched a song grow up before your very eyes? Spend three minutes with this one for sure: you can stream it via the Soundcloud embed below, and pre-order Dalliance from Slumberland right here. -- Edward Charlton

>> The madcap psychedelia lives! If our readers were truly in tune with this reviewer's taste, they would know he is very excited about the forthcoming cassette from Boston-born and now Berkeley, Calif.-based Bozmo. The set is called Leather Umbrella and it is due any day now on the un-Google-able Peaking Pear Records. The collection -- which was recorded entirely by Bozmo principal Bo Moore to a Tascam 388 -- presents a classic case of hard-shifting mod that chases it's own fascinating logic. The title track from the album has been loosed to the wilds of the Internerds for a couple weeks; it's a Revolver-esque jaunt through fields of poppies that features bouncy harmonized lead guitars and delicately picked verses that serve as a perfect foil to the bubbly guitar work that bookends the piece. Adorning the snappy composition are great, prominently mixed tambourines and period-correct vocal delays that neatly wrap the production in perfect 1967 indie dressing. While "Leather Umbrella" cycles resolutely between its A and B sections without further development, the overall energy and neat melodic flourishes recall our beloved Lilys circa Better Can't Make Your Life Better. That's high praise from this publication, don't you know. We've had an opportunity to delve into all of Leather Umbrella and are pleased to report that its contents are uniformly terrific, and, in fact, the brightest spots arrive back-to-back in the middle of the record. Here we find the mid-tempo strummer "Cheap Blue Memory," a slightly downcast mood piece with excellent lyrics, gentle vocal harmonies and an amazing, warped guitar solo. That tune is followed by the fuzzed-out pop triumph "Perry And The Vest," with high-voltage harmonies in the chorus and another, albeit briefer, transcendent guitar solo. The two tunes each clock at about three minutes and cry out for release as a vinyl 7", so if you've got unspent student loan money burning a hole in your pocket maybe now is the time to flush your future down the toilet and start your own indie label. While you ponder that exceedingly questionable advice, stream and download "Leather Umbrella" via the embed below and watch that Bandcamp page for information about the Leather Umbrella cassette, which may possibly be your most prized possession this summer. -- Edward Charlton

>> It's not uncommon for this American blogger to wonder about and perhaps glorify the life of ex-pats. For one thing, there's the suggestion of European jet-setting, or contemplative Far East sightseeing, but even more so, there's the thrill of making a fresh start somewhere challenging and different. Our urge is heightened by our recollection that Berlin indie rockers Mincer Ray counts among its number not one, but two American ex-pats apparently in search of some great truth about scratchy, trad-sounding indie rock. Mincer Ray recently completed a new, long-playing collection, Fellow Traveler, which is available to download now for any price via Bandcamp. What quickly becomes apparent when playing the ten tracks is the extent to which the group has surpassed the delightful Guided By Voices-inspired lo-fi of 2012's Ray Mincer, which we wrote about here. The new set is more scattered but no less creative, at turns surprisingly rootsy and soulful, and at others sonically aggressive. "Couch Neighbor Catherine" and "Bassmaster" trade in shambolic loose strums that remind this reviewer of Pavement at their most country-inclined, or Palace Brothers at their most precise. "A Pickaxe From My Mom" and "Grand Tunk Plastic Lake" are both bits of classic, Yo La Tengo-styled indie. Instrumental "Great Trunk National Park" evokes Fugazi at their most willfully sloppy and the shape-shifting, instrumental closer "Das Grune Tor" utilizes a distorted whammy to great effect. Sure, the Berliners often evoke their touchstones, but the sense that they're having a blast and tapping into something pure makes one curious as to what great truth they've uncovered during their international adventure. Download Fellow Traveler via the embed below; it's for you. -- Edward Charlton