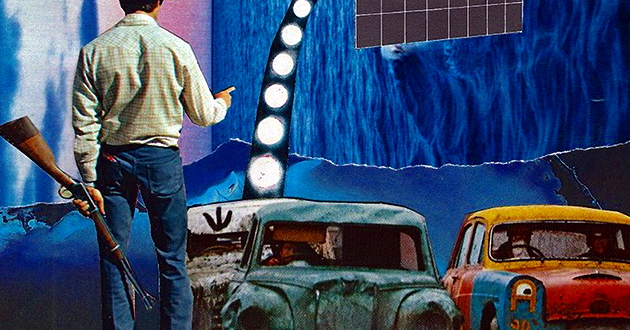 >> Hallelujah The Hills' new record Have You Ever Done Something Evil? commences as a fully involved house fire, with snare drum barking from behind a curtain of dense electric guitars in time to the declamations of fronter and band mastermind Ryan Walsh; the proverbial roof of the opener, "We Are What We Say We Are," caves after about 100 seconds, as Mr. Walsh pleads his case directly, but quietly, into the camera lens, a thumb and forefinger at the lip of the lens and his other hand pressed reassuringly against the shoulder of a shaken camera operator. The song eventually burns itself out, but its euphoric rush and poignant ebb color the entirety the the five-piece's new record like a new red t-shirt in a load of whites. "We Are What We Say We Are" is an auspicious beginning to the Boston quintet's new and fourth collection, which the act released last week on its own Discrete Pageantry imprint. For months the set was going by the working title Do You Have Romantic Courage?, as we reported here in October, and that title survives, attached to another tune found within the cracking collection. The album highlight may actually be the more subdued ballad "MCMLIV (Continuity Error)," which is illuminated by Walsh's gently delivered, honest vocals and electrified by controlled crescendoes from the players. Like that song, Have You Ever Done Something Evil? isn't flashy, there's no gimcrackery here. Instead we have a showcase of exemplary songcraft -- the stuff that actually puts air in the bellows of a band built to last -- and vibrant performances. And while there was a laundry list of concerns for Walsh and band to grapple with over the last year or two (quitting a long-held job to focus solely on writing and recording; potentially voice-altering surgery; possible -- but unrealized -- pitfalls with crowdfunding; whether the band had good stuff left in the tank after releasing career-defining singles; and errrm... we dunno... extreme-energy cosmic rays?), Have You Ever Done Something Evil? delivers uniformly terrific results. Hallelujah The Hills is presently at the front end of a short west coast tour, and will play a hometown release show May 30 at Great Scott in Boston. The event also features sets from Tallahassee and Thick Wild, and starts late but apparently promptly at 10PM; there are full details right here. While you ponder that and other possible futures, stream the entirety of Have You Ever Done Something Evil? via the embed below, and click through the purchase on compact disc or as a digital download. We interviewed Walsh here last October for Show Us Yours #19.

>> The memory grows dim -- and we've determined over the years that quite a few of our memories aren't even real -- but nonetheless we're fairly certain that the first act we saw on the non-stage at the late, lamented Union Square rock club Radio was the Boston quartet Marconi. And while we didn't ever direct our full critical attention at the band, we did make this brief aside here two years ago: "Placing one's finger on the precise source of the quintet's appeal is tricky, but we think a lot of it can be chalked up to singer Luke Kirkland's crooked smile as he languidly looses lyrics from amid the band's engaging indie rock constructions." We've learned recently that Marconi has gone the way of the dodo bird (there are two splendid final recordings here and here), and that Mr. Kirkland has undertaken some solo work that promises to explore markedly more electronic textures. He is releasing the new music under his own name, and our first taste of same is the meditative pop mirage "My Southern Guides." Our immediate and somewhat odd reaction is that the patient and vivid song plots a middle ground between LCD Sound System's "I Can't Change" and Level 42's "Something About You." "My Southern Guides" is both lighter and more fluid than either of those touchstones, but Kirkland's ambition is no less grand. The song steadily swells, from a beat and vocal to an arrangement lush and distinctly retro-modern -- something like a bygone, Jetson-ian vision of a future that never came to be (perhaps that is what made us think of Level 42?). "My Southern Guides" is part of a planned collection of tunes Kirkland calls Jet Black Eggs (another song title); he does not intend to release these new songs as an album, but he does consider them a series. We recommend you watch this space for more new music, and stream "My Southern Guides" via the embed below.