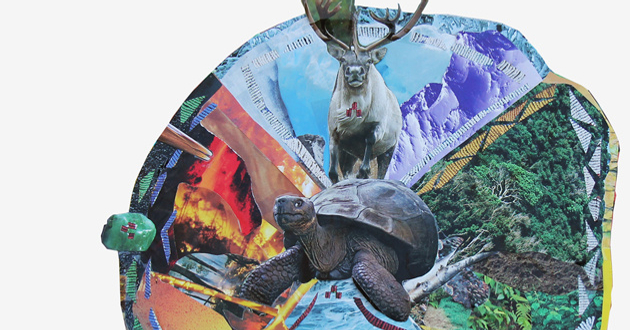 >> We make no secret of our affinity for the unexpected in music -- hell, even perplexity, in the right frame of mind -- and the latest band to wow us in that regard is Guelph, Ontario-based psych-pop explorers WHOOP-Szo. The act, which just this week self-released their incredibly ambitious and apparently third LP Niizhwaaswo, has spent a substantial amount of time living in "Arctic Canada" among certain Inuit people, and a curious email we received described their latest release as "our third and final document of our adventures" there. The songs on Niizhwaaswo are bathed in a manic, modern psychedelic sensibility; soothing faraway vocals anchor a collection that otherwise readily sprawls in every direction with a sort of aural schizophrenia. While perhaps hard to grasp at first, this is truly rock music that betrays little in the way of traditional influence or stylistic corruption. Instrumental opener "Boat Cave" establishes a mood with long blasts of feedback, organ and all manner of squiggly fuzz sounds, as well as jazzy percussion, all of which serves to introduce the improvisational nature of the band. By the next track, "CSG," group vocals bathed in reverb and atonal chordings make overatures toward a traditional tune, but are ultimately scuttled by metallic chugging, snotty screams and a derailed train ride of moans and yelps. "Myeengun" recalls EVOL-era Sonic Youth, and their bruised and tense no-wave sexuality. Lead single "Jan. 3rd" even more surprisingly peels things back to reveal an acoustic strummer befitting of certain songs in Kevin Drew's repertoire. "I'm Outside Looking In," they sing, on their one truly "normal"-sounding song, and really no sentiment is more fitting, especially considering where this set was recorded. Given the vast amount of terrain it covers, Niizhwaaswo is shockingly brief. In today's ultra-connected era, one expects nearly every musician to have consumed heaps of other styles and touchstones that set general parameters before she or he ever writes a note, but WHOOP-Szo are the exception to the rule. Are these guys the spiritual successors to yesterday's unhinged, experimental improv pop ensembles like The Red Krayola, The Pop Group or Butthole Surfers? Maybe. Either way, we're all lucky that there are still creative minds out there that can so interestingly break free. We highly recommend Niizhwaaswo, which you can purchase here as a beautifully silkscreened, single-sided vinyl LP or digital download. Stream the entire LP via the embed below. -- Edward Charlton

>> Coming June 16th is yet another classy slice of mid-fi goodness from Brighton, England's reliably great Faux Discx label. We speak of the third album from South London-based jangle merchants Dignan Porch, the one-time bedroom pop-ject of one Joseph Walsh (no relation, we're sure) that is now a quartet. Their forthcoming set is called Observatory, and, based on the jaunty pop of the preview track "Wait & Wait & Wait," we expect it will be a fine compendium of the band's signature refined guitar-pop sound. Having already released two albums on New York's renowned Captured Tracks imprint, Dignan Porch are hardly newbies. "Wait & Wait & Wait" is a fuzzy, bouncing and vaguely country-tinged track with a fine dual vocal harmony throughout the verses. The tune touts a fantastic pop structure, with a subtle, sly chorus that sneaks up on the listener. Tasteful guitars never showboat, but instead inhabit the sad, patient groove in ways the Velvet Underground's Sterling Morrison was particularly adept at on those classic live albums. Even more special are the last three chords of the main riff, which are emphasized by the drummer's crash cymbal and effect a great downward run that perfectly highlights lead singer Joseph Walsh's melancholy, choked-up acceptance as he waits, and waits, and, well, you know. Preorder Observatory on 180g vinyl or as a digital download right here. If you want that vinyl, act fast: according to Bandcamp only 36 of the original pressing of 500 flat circular discs remain unsold. Stream "Wait & Wait & Wait" via the embed below. -- Edward Charlton

>> In the run-up to the release of it latest LP, London-transplants Popstrangers have played a perfect inning. The first brace of preview singles, the undeniable "Country Kills" and dark groover "Don't Be Afraid," stepped to the proverbial plate with quality, and a third preview single from Fortuna, the trio's recently issued sophomore set, loads the bases. "Distress," is a delay-soaked classic punk rocker, sporting the band's characteristic textures, a free-wheeling sensibility and a sly chord arrangements. The tune touts fantastic, seemingly off-the-cuff verse melodies that present a perfect aural foil to the song's straightforward guitar strumming. "Distress" builds to a brilliant if cloudy Britpop plea in the chorus ("Why don't we all just stop fighting?") that, interestingly, evokes the more accessible cuts from (formerly) fellow New Zealanders Bailterspace. Indeed, the press materials accompanying Fortuna make light of Popstrangers' transition from their native NZ to London, so maybe, just maybe, said evocation is a friendly shout-out to a life left behind. Popstrangers' grand slam, of course, is Fortuna itself. Released just last week in the U.S. on the increasingly formidable Carpark label, the collection confirms what this reviewer suspected -- Popstrangers are capable of applying their careful sense of texture and production to an entire, dynamic set of songs. Opener "Sandstorm" dramatically shifts between dreamy picked passages and a key-changing strummed chorus. "Tonight" conjures more of the odd, choppy, upfront guitars that made the dynamite album highlight "Country Kills" so thrilling. Closer "What's On Your Mind?" further evidences that this band's boldness at marrying together disparate slices of songs to form unexpected, poppy epics. Carpark released Fortuna May 23; purchase it right here, and stream the entire collection via the Spotify embed below. -- Edward Charlton