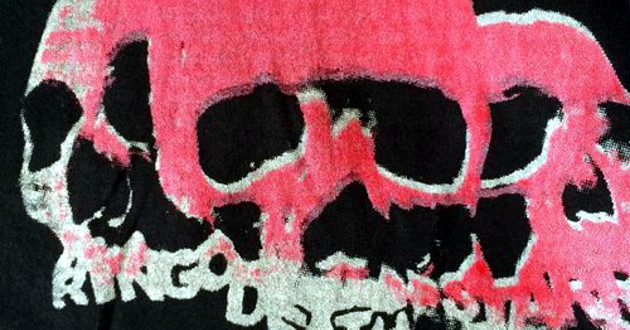 >> Austin-based shoegaze heroes Ringo Deathstarr yesterday unveiled "Big Bopper," the cracking first new song from a planned third full-length. The tune, as older fans may know, takes its name from the tragic Texas proto-rocker Jiles Perry Richardson, Jr., whose nickname was The Big Bopper. Mr. Richardson perished in the same plane crash that took the life of legends Ritchie Valens and Buddy Holly, all of which was memorialized by that loathesome Don McLean song, you know the one. But enough of the history lesson. Ringo Deathstarr's "Big Bopper" is an MBV-indebted mind-scrambler that blasts distorted guitars through a rich reverb and over a danceable beat, to which fronter Elliot Frazier applies a cyclical chant that may or may not have to do with losing a bet and boarding a doomed aircraft. The song was posted to the Soundcloud of the Deathstarr's Japanese label, Tokyo-based Vinyl Junkie Recordings, which suggests to us that the new record will certainly be released in Japan, and perhaps released to that market first, as was the case with Ringo Deathstarr's last EP, God's Dream. Based on this Facebook post from fewer than three weeks ago, we're guessing the bulk of the new record has yet to be recorded, and of course there is as yet no album title or release information. But it makes us feel good knowing that there is new Deathstarr in the offing for 2015. God's Dream was released in March 2014, and we reviewed it right here. Stream "Big Bopper" via the Soundcloud embed below.

>> London indie pop foursome Seeds Of Doubt Monday will issue a terrifically titled new EP, its third, Audible Human Repellent. The short stack, despite the moniker, is actually quite listenable, and contains four songs that were apparently recorded in a single day in November. The undeniable highlight of the short set is the peppy tune "Shelf Life," whose agile, Feelies-styled jangle supports light lead guitar work that punctuates a pretty, ascending melody in the chorus. Here fronter Chris Hopkins pleads, memorably, "help me help myself, because I don't want to end up on the shelf." Lead track "Know Your Limits" proffers a more subdued attack punctuated by a somewhat adenoidal vocal, but the song really leaves the ground around the midpoint when nimble lead guitar guides the song through a tense bridge and into a ripping guitar solo. The band earlier this week loosed to the wilds of the Internet this concise, cat-filled video for the slack yet agitated second track, "Others Pay," whose chorus repeatedly warns "others pay for our leisure." We last spoke with Seeds Of Doubt here in May, around the time of the release of its DCP EP. Audible Human Repellent is being issued by London imprint Life Dunk International on limited-run cassette or digital download (both of which purportedly come with a b-side alternately described as a "special luxury surprise" and "magnificently decadent;" the mind reels at the possibilities). Stream the collection via the Bandcamp embed below, and click through to purchase now, ahead of the release Monday.

>> Formerly Boston-based rock trio Boom Said Thunder, which now reps the 718, at long last figuratively returns Monday with a strongly vibing new digital single that boasts the threesome's best -- and longest -- songs to date, "Summer Twin" b/w "Carnivore". The latter track clocks in at more than six minutes, during which the act conjures a cloud of fuzz from persistently applied crash cymbal (or a ride bashed like a crash) and distorted bass, establishing a dark firmament into which fronter Abby Bickel casts an ominous, reverbed incantation. Taken all together, the number suggests the mystical atmospherics of early Jane's Addiction. "Summer Twin" touts a brighter melody and a more fluid groove utilizing the act's characteristic recipe of bass, drums and voice. While John Magnifico's bass burbles and pulses, Ms. Bickel's vocal -- which here echoes somewhat the strong alto of Sinead O'Connor -- remains calm and centered well into the fourth minute, which adds to the song's mesmerizing affect. Although the vibe steadily intensifies and Bickel's voice ultimately soars, its most poignant and dramatic moment is the repetition of the simple, chilling lyric "I grow old, you stay the same." The brace of tunes was recorded in Brooklyn this fall during sessions underwritten by a popular footwear brand, and later mastered by local good guy Richard Marr, who also recently mastered Pile's forthcoming You're Better Than This. Boom Said Thunder play a relatively rare local date Friday at Great Scott, on a bill that also features Velah and Burial Sound. We expect hearing these new tunes performed live will really be something special. Clicky Clicky last wrote about the trio here in March 2013, around the time of the release of its debut LP Exist. Stream and download "Summer Twin" and "Carnivore" via the embed below.