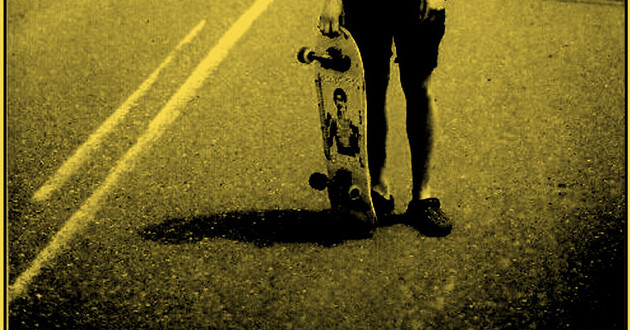 >> Lefse Records has unveiled a real blinder from Vancouver three-piece Weed in the form of "Thousand Pounds," the first single taken from the band's forthcoming sophomore set Running Back. "Thousand Pounds" bursts open with a two-chord curtain composed of distorted guitar and white-out cymbal crashes, which enshrouds a relatively serene, slap-backed vocal from fronter Will Anderson that ultimately leads the song to an uneasy, clanging denouement. The flipside, a tune called "Turret," is a "super old b-side" taken from the band's first-ever studio session. For context, Weed issued its debut long-player Deserve in September 2013 on Couple Skate, and also has an EP and another single under its collective belt. Lefse will release "Thousand Pounds" b/w "Turret" as a vinyl 7" and digital download Feb. 24, and pre-orders are being taken right here. Running Back is a 10-song set slated for release April 7, with a limited run of vinyl being pressed to bright pink media. These LPs will come packaged with a lyric sheet and large newsprint poster, and -- magically -- they, too, are also available for pre-order. Stream "Thousand Pounds" via the Soundcloud embed below. Weed embark on a brief West Coast tour Feb. 5 -- its first since 2013 -- and all the dates are listed at the act's Bandcamp right here.

>> The original inspiration for Clicky Clicky's sorta neglected Regolith songwriting challenge feature, Samira Winter, is back at it, hammering away at a song-a-week project that is producing terrific results. Ms. Winter's latest entry, the eleventh in the present series, is the hazy dream-pop gem "She Said No." The tune is a collaboration with a producer/engineer named Scott Barber, and its power is in its simplicity: while it is of average length, the entire thing feels like one long, affecting chorus. The actual chorus is a knockout, pairing a rich, descending guitar melody with Winter's arresting voice -- backed, presumably, by Mr. Barber's -- insistently repeating "all because she said no." Ms. Winter recently soft-announced the sophomore set from her full-band project Winter -- the first recorded with her more recent left-coast lineup -- which will be called Supreme Blue Dream. The set will be issued by LA's Lolipop Records, according to this article in LA Weekly, but there is no official word yet on formats or a release date (although our recollection is Lolipop favors cassette releases). We've heard the record and expect fans will be very pleased to hear what is coming. The band Winter has been gigging very regularly since relocating to California about a year ago; it is on a hot bill next week supporting Dead Meadow at the Continental Room in Fullerton. We previously wrote about Samira Winter's first song-a-day thing right here in September 2013, and have a written a bunch of other stuff, like this piece about Winter's "Alligator" single here, and we premiered the video for "Bedroom Philosophies" right here. Considering how strikingly strong the material from the current songwriting challenge is, we would be very surprised if some of it didn't end up on a forthcoming Winter record, especially as -- although we don't want to give too much away -- certain tunes from her first songwriting challenge will appear on Supreme Blue Dream. All of that, of course, remains to be seen. But we highly recommend "She Said No," which you can stream and download via the embed below, to your attention.

>> From the same fertile scene that brought the indie rock world What Moon Things comes the fresh new indie punk duo Diet Cig. Fronter Alex Luciano and drummer Noah Bowman ably conjure the sort of scruffy charm that made Tiger Trap records so listenable, oh, a 100 years ago. Which, if you don't know from Tiger Trap, means strong pop fundamentals, substantial vim and appealing rough edges, with occasional inbursts of classic girl group reverie ("Scene Sick"). It's a sound that places Diet Cig in the good company of contemporary acts like Swearin' and Radiator Hospital. Diet Cig are debuting with an almost absurdly strong five-song EP called Over Easy, which will be released by Father/Daughter on cassette and as a digital download Feb. 24. The short set is already drawing raves, and it is easy to hear why: we've listened to the thing on repeat for hours at a time and Over Easy has yet to feel stale. Stream the scathing rocker "Harvard," with its defiant chorus "fuck your Ivy League sweater," and the aforementioned, concise and more introspective (but similarly fuck-filled, radio programmers be warned) ballad "Scene Sick" via the embeds below. Pre-order Over Easy from Father/Daughter right here, it's the right thing to do and the tasty way to do it.