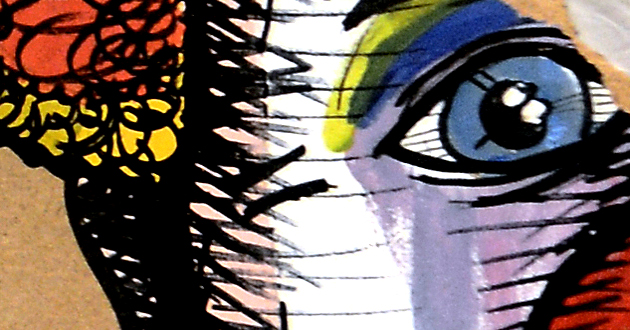 >> Happy new year, and happy new Pile. Stereofork got the nod yesterday for an exclusive on the Boston grunge titans' terrific new track "#2 Hit Single" -- taken from the forthcoming set You're Better Than This (let's just let that title hang there meaningfully for a second... maybe a second more...) -- and in doing so perpetuated the irritating trend of large music publications being more about firsties than journalism. Had Pantsgum bothered to do 10 minutes of research (we get it, music writing is hard, guys), it could have told you that the reason the preview tune is called "#2 Hit Single" is because the title "Number One Hit Single" was already used. Indeed, that tune appeared on Pile's wonderful 2010 LP Magic Isn't Real; you can hear it right here or at the embed below. "#2 Hit Single" -- also embedded below -- echoes the slashing rhythm of the earlier tune's opening guitar riff, but inverts the melodic elements as it introduces a call-and-response between fronter Rick Maguire's vocal and the annihilating instrumentation of the verse. The aggressive jam abruptly ends after 145 seconds, and then is gone into the proverbial night like a deranged mugger. Pile's new record You're Better Than This will be issued March 3 as part of a Exploding In Sound's exceptionally strong first quarter release schedule, which also includes bugcore heroes Krill's powerful A Distant Fist Unclenching. Pile's newest was recorded in Omaha and features electrifying and hyper-roomy production that recalls the biting sound of early Jon Spencer Blues Explosion records, and we think Clicky Clicky readers are going to find a lot to like on it, particularly the wild, rootsier sound of tunes like "Fuck The Police" and the ambitious, awe-inspiring closer "Appendicitis." Pre-order You're Better Than This on vinyl, CD or cassette via Pile's Bandcamp wigwam right here.

>> December seems like a bad time to promote an album. Not only is there an endless round of "Best of 2014" lists and year-end nostalgia, but nearly everyone is on vacation and not listening to some great new indie rock. In jeopardy of being lost in the late-year shuffle were certain late-season singles from Brooklyn four-piece guitar poppers Leapling, whose album Vacant Page is seeing a February 10th vinyl co-release via Inflated Records and the mighty, aforementioned Exploding In Sound. Big news, right? The second single "Silent Stone," released around the holidays, is a stone-cold killer cut of spacey, free-jazz guitar rock. "What have I been told? / Leave me in the cold" sings guitarist Dan Arnes in a soft, plain-spoken, everyman voice that brings to mind Death Cab For Cutie, albeit sans the excessive verbiage. That confused sense of resolution wraps itself around the song, guiding what are at first surfy guitar lines that mutate into bum-note guitar solos and pick scrapes that dance around tight, trained hi-hat work. Best of all is a breakdown at the two-minute mark, where the bassist has a chance to shine with oblong chops. The lead guitar channels Wilco's avant string mangling circa A Ghost Is Born, while the complex, steady chords ground the exposition. Perhaps best of all, Leapling is a hard band to define, and that’s what makes them special. Consider the act a crucial addition to EIS' stable. The first 150 copies of the vinyl edition of Vacant Page come on colored splatter vinyl, so don't sleep on this promising album. Pre-order the set from Inflated Records right here. -- Edward Charlton

>> Man, how this writer digs indie rock ambition. Take, for instance, the recent inbox find of France's Odessey & Oracle, a baroque-pop unit whose namesake is The Zombies' 1968 masterwork (the misspelled "odyssey" is also an homage, to the poor grammar of The Zombies' original album art artist). The French outfit's latest album Odessey & Oracle and the Casiotone Orchestra is a lofty, lo-fi love letter to the over achieving '60s pop scene, one that (thankfully) pays tribute without the wholesale recycling of old sounds. Out on vinyl and CD via Carton Records, the album is a technicolor trip that highlights the arrangement genius of those original bands while guiding the sound somewhere new. "I'll be floating far into dreams" they sing on opener "2016," which shapes ukulele strums into a progressive dream-pop track. While the cheesy-sounding synths may startle at first, they ultimately add to a pleasant home-grown vibe -- inadvertently recalling the playful, Casiotone genius of The Unicorns in the process. Album cut "Esprit Du Ciel" applies the band's native tongue to lush male vocal harmonies, while "Alphabet" and "Fixing The World" tone things down via gentle female that defuse the more complex and classical analog synth work of tracks including "Invention #7." Wide-eyed, accomplished, orchestrated and in love with an era that deserves the attention, Odessey & Oracle and the Casiotone Orchestra is not only a fun addition to the baroque-pop canon, but a great reminder of what made that scene so special. Order the album right here. -- Edward Charlton

Thanks for turning me on to Odessey and Oracle. This album is very good.

Thanks for the comment, Dusty. At the risk of disturbing your reading reverie, we'd love to talk to you for a feature about the ACSACS reissue and other stuff. If you're game, hit me up at jay (dot) breitling (at) gmail.com