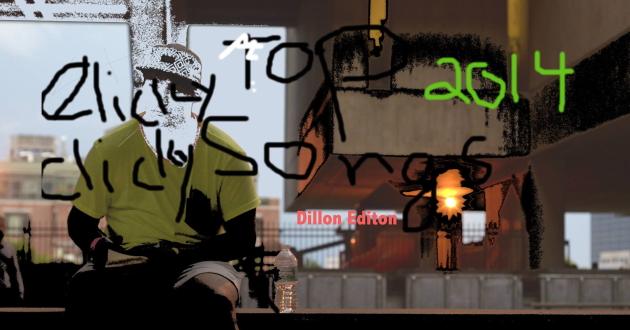 [PHOTO: Quinn Banford] This was the first year I can remember in which the sheer volume of incredible music actually overwhelmed me. This is not a complaint, mind you, 'cause you know, there are things far worse than falling behind on the hype cycle merry-go-round. But it certainly made reassessing the highs a more trying process. In all honesty, 100 tracks might not be enough to fully detail how deep this year's roster of shit-hot tracks was, but the 10 below perhaps shine brightest.

Note that a concerted effort was made in compiling my list to exclude tracks that will be represented among my top albums, barring one (slight) exception. This limitation was imposed with an aim to both challenge myself and expose (or re-expose) you, dear reader, to as wide a universe of music as possible. I'd like also to highlight four tracks that just missed the cut and that warrant mention. Those are, in no particular order, Whirr's towering nü-gaze specimen "Ease," Kal Marks' queasy, existential stomper "It Was A Very Hard Year," Soft Fangs' buzzing lo-fi stunner "You're The Best," and Playlounge's powerful emo-gaze anthem "Zero." Thanks again to Jay and Eddie for making my writing look so good by association, and to all of you for reading. Here's to next year's list being even harder to concoct than this one.

In our review of this split, we mused about this track potentially becoming Ovlov's defining statement. It's now safe to say it's the year's defining statement as well. A ridiculous 6-minute scorcher, "Crocodile" often feels like an HD scan of one's favorite Dinosaur Jr. tune circa You're Living All Over Me, but fronter Steve Hartlett’s high-register yearnings are crystal clear and as a result perhaps even more emotionally potent than Mr. Mascis' mumble. Plus, the bass is turned up far louder than J would ever allow.

"...it's in your way to walk around beneath your sound."

In our most humble opinion, no band dealt in wide-eyed nostalgia better than Philly's Beach Slang in 2014, and "Get Lost" is perhaps their high watermark thus far [arguably -- Ed.]. Retelling stories of nights spent at basement shows with a figurative voice heavy on descriptors but light on specifics, the song does an unbelievably good job of replicating that time in an indie kid's life where every chord change feels crucial. It's a situation certain of the CC staff still lives out on a weekly basis.

We've had our ears tuned into NYC power-pop concern Charly Bliss for a bit now; we're like two degrees separated, in a sense. And we reckon it won't be long before everyone is tuned in, 'cause they have all the proverbial goods. The three-song sampler the act issued this year was a winning combo of sweetly-sung melodies and crunch-y, exacting guitars. It's precisely the kind of a thing that demands repeated listens, especially this second tune, which features some nifty boy-girl harmonies and a killer fuzz-bassline that bounces around like a Super Ball.

Jay’s albums list poured plenty of praise on Krill's interpretation and usage of academia within their churning, post-punk attack, so let's instead unpack the sonics that made Steve Hears [review] such a vital release. Namely, the completely bonkers drum work the now-departed and Brunched Luke Pyenson unleashed at the tail end of this, the EP's penultimate track. Beginning around 3:30 Pysenson delivers easily the most stunning drum fill of the calendar year, a backwards roll across the kit that kicks the song's pained final chorus in the ass, hard. The new dude they got is pretty damn good, too, incidentally.

Speaking of Jay's list, he also ripped/riffed on the misnomer that is art-funk, which I'm inclined to agree with. Either way, Ava Luna's Electric Balloon [review] was an absolute stunner of a record, capable of interpolating seemingly divergent styles of music with ease and grace. The thing could also rock out, as evidenced by "Sears Roebuck M&Ms," a track that rests some utterly bat-shit stream of consciousness lyricism on a restless, body-heaving groove that refuses to quit. The tune is a live staple that we were lucky enough to take in more than once this year, including a particularly memorable iteration in a house in JP some months back.

"...Everybody says we’re talking about the new sweet thing WOOOO."

We were a little late to the party vis a vis this Brooklyn quartet, having missed out on some previous EPs. But buzz towards the end of the year surrounding the release of Teenage Retirement piqued our interest, and it was "Hot 97 Summer Jam" that solidified Chumped's need-to-know status. A perfect approximation of everything great and fun about pop-punk, and done right, the song presents two-and-a-half minutes of unmitigated fuzz-rock hooks. The longing, hummed-out backed vocals on that chorus get lodged in your skull almost immediately.

This year saw a number of insanely satisfying debut records, but perhaps none were more satisfying than Cayetana's. The Philly trio do the punky pop thing damn good, regularly packing hook after tuneful hook into three-minute bursts of charm. "Hot Dad Calendar" rocks hard, with its relatively clean guitar strums and hi-hat skitter setting the backdrop for what is ostensibly a self-actualizing anthem.

Dæphne are somewhat of an unknown quantity even around Boston thus far. As far as we know, few of the reputable local publications picked up on the short, mystical Family Vacation demo the act issued earlier in the year, perhaps due to the fact that its physical release was handled by Texas-based Funeral Sounds. No matter, the demo, and the tune "Driving Down A Country Highway Blasting Weezer" in particular, is an excellent slice of lo-fi dream-pop. That it delivers the kind of math-y and sharp dynamic twists and turns characteristic of contemporary emo only sweetens the deal.

The imminent sound of something very important, this is. Recently minted Boston shoegaze collective Coaches had a relatively quiet 2014, only loosing to the indiesphere a two-sided digital single, with one of said sides being an instrumental. However, "amisarewaswere" is a gargantuan tune, one capable of establishing a formidable reputation. Boston lost two of its great noisy compatriots this year in Soccer Mom and Young Adults, but Coaches appear poised to step into those large, empty sets of 'gazey shoes.