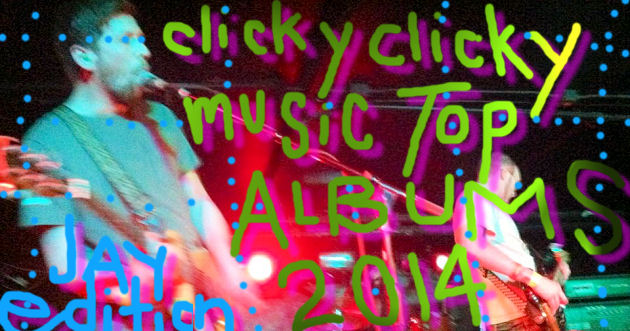 It can feel anti-climactic, writing the intro blurb to the year-end list. The choices are made, the listening, the re-listening, the consideration all put to bed. But here's the thing: just listen again and the records spring to life -- and particularly these records: their greatness is re-greatened, just add water, and volume, the more the better. We revealed our top songs of the year here last week, and that list certainly was a strong indicator of what you'll find below. Namely: the best of the best, our favorite 10 records of 2014. Every year with a new Johnny Foreigner release is a great year, our position on that has been clear for the better part of the last decade. But there were plenty of things that were revelatory when we first heard them this year. We expected the Lubec record to be great, but did anyone expect it to overachieve so much? Certain street-level Ava Luna or Perfect Pussy fans might have expected those records to rule as hard as they did, but we were blown away. Ditto for Cookies, Literature and the mighty, mighty shoegaze concern She Sir, whose LP Go Guitars probably logged the most spins on our turntable this year of any new release. So below we break it all down (and maybe you already heard us talk it out with KoomDogg during one of the last three episodes of the Completely Conspicuous podcast). Our default position on indie rock and electronic music and the various permutations of same that we champion is decidedly optimistic. 2014 only strengthened that belief, and so we are totally stoked for 2015, which already looks like it will be brilliant based on the early notices of forthcoming LPs from Pile, Krill, Speedy Ortiz and Colleen (and maybe even The Replacements), as well as possible reissues from Lilys. Bet you can't eat just one. We humbly thank you for reading the blog in 2014.

The Birmingham, England-based noise pop titans are not only amazingly prolific, but also remarkably consistent. Pessimists can sit around prognosticating a slump, but Johnny Foreigner gives no indication of obliging, even in the wake of releasing a sprawling masterwork, its third LP Johnny Foreigner vs. Everything. As we summed up here in March, the successor album "You Can Do Better is a powerful, diabolically catchy set, a compact firecracker of a record that ably and convincingly delivers the band's intelligent brand of bash and pop. The music is as dramatic and as emotionally vital as ever. The Brummies have stared down the challenge of its own album title." The lean and mean record touts potent ballads and brawlers and somehow, remarkably, was as strong as any prior release from the act. Johnny Foreigner will mark its official 10th anniversary next year, and we know fronter Alexei Berrow has already set to work on new songs for the next LP, and we couldn't be more stoked about what comes next whenever it gets here. Stream the set via the embed below, and buy it from Lame-O right here.

Oh how we waited and waited, but when Lubec's proper-ish full-length debut The Thrall finally arrived, it surpassed every expectation. The Portland dreampop unit's debut is like an ideal mate, both really smart and super pretty/handsome, and while the set didn't necessarily breach the overground, the magnificent guitar pop speaks for itself. As we said here in our review in September, "The Thrall is, simply put, a revelation, a fully realized and kaleidoscopic guitar-pop masterpiece that presents the band's striking songcraft and bright optimism within a shifting aural landscape that brilliantly balances clean, jagged leads, crystalline reverbs and thunderous percussion and fuzz." The band has already been writing new material and has studio time booked early next year, so there is more where that came from. Still, one could understand if Lubec rested on its laurels just a bit more, given the remarkable accomplishment this LP represents. Stream the set via the embed below, and buy it on cassette from Like Young right here.

Cookies' terrific full-length debut was preceded by a series of four 10" EPs packed with immaculate pop tracks, but even so Music For Touching was surprisingly excellent. The set synthesizes fronter Ben Sterling's affinity for contemporary pop and yen for engaging experimentalism, and the album's tracks hit the mark across the board, from the boundless groove of "Go Back" to the electrified euphoria of "1,000 Breakfasts With You." While the icy cool in meditative closer "The Dream" echoes certain tunes from Mr. Sterling's increasingly remote former life as part of the dynamite act Mobius Band, the path forward for Mr. Sterling's present project feels extremely ripe for exploration. Hopefully a new record isn't as long in coming as this one was; we reviewed Music For Touching here. Stream it via the embed below, and buy the set from the band right here.

4. Krill -- Steve Hears Pile In Malden And Bursts Into Tears -- Exploding In Sound

The smartest, most intellectually challenging act in contemporary indie rock this year scored big with an EP highlighted by a song in which the fronter imagines he is a literal piece of shit. Indeed, the tension between Krill's academic, "high art" idea/ls and visceral everyman narratives is perhaps the act's most potent calling card, but the band's very relatable humor and inclination toward rock songs that rock make Krill's work connect no matter the level at which the listener (or reviewer) chooses to engage. Steve Hears Pile In Malden And Bursts Into Tears was a triumph, and we are expecting big things from the band's next LP, A Distant Fist Unclenching, as well. The forthcoming collection is slated for release in February; buy Steve from Exploding In Sound right here.

The meteoric rise of Perfect Pussy in 2014 created a platform for the band's fiery, progressive politics, and set the stage for a planned 2015 solo set from brilliant fronter Meredith Graves. But, more importantly for us, the Syracuse noise-punk quintet's dynamite Say Yes To Love placed hardcore-influenced music center stage -- at least in the underground, which as we all know is the only 'ground that matters. The exhilarating record is arguably the best melodic hardcore collection since Fucked Up's David Comes To Life. We spent a lot of time listening to straightedge hardcore at the turn of the '90s, so Perfect Pussy's ferocious collection felt a bit like coming home, and a bit like sticking one's head out the window of a car at 60 miles per hour. The future feels bright for the act, and we're hopeful that its pronounced stances on social issues might also spur a revival of the liberal politics of two decades ago in independent rock music. Dillon Riley reviewed Say Yes To Love for Clicky Clicky right here in March. Buy the record from Captured Tracks right here.

Oh how we waited and waited and waited for this one, too. After all, She Sir's triumphant preceding set Who Can't Say Yes was released seven years -- an Internet lifetime -- ago. What we finally got in 2014 was the year's most lush and pristine dream-pop record. As strong as label Shelflife's roster is, and as focused as its aesthetic is, we were still overjoyed when the Portland-based enterprise announced it had signed the Austin quartet, as the pairing seemed ideal. Senior Writer Edward Charlton deemed Go Guitars, which he reviewed here in February, a "tour de force of sunny, spectral and shimmering rock" music. The Clicky Clicky Brain Trust expected it would be one of the year's best, and the Clicky Clicky Brain Trust was right. Buy Go Guitars from Shelflife right here, and stream it via the embed below.

Something about the phrase "art-funk" really bothers us -- it's the built-in presumption that there isn't any art there unless you make sure to tag it on the front end (same deal with the phrase "art-pop"). Our personal hang-ups aside, the aforementioned descriptor is perfectly fitting for Ava Luna's ridiculously smart and tight LP Electric Balloon. We've seen the band live a couple times over the last couple years and their shows are mesmerizing. But the music on the LP is somehow even tighter, slightly frenetic, and rich and soulful despite a claustrophobic punk edge. We suppose it's that edge that translates more directly on the record as opposed to the stage. But, either way, it's a curious party record with a head on its shoulders. And it's one of the best records of the year. Stream Electric Balloon via the embed below, and purchase the set from Western Vinyl right here.

Big, fizzing melodies and fuzzy guitars are a hallmark of the Slumberland sound, and Literature's diabolically catchy LP Chorus delivered perfectly on the Bay area label's pleasing proposition. We were surprised to learn Literature was operating out of Philadelphia, as we like to think we have a good idea of what is going on back in our former hometown. But it was a most welcome surprise, of course, and this record in particular did us a lot of good during some long and grueling stretches of work. We recall at least a couple days during which we listened to Chorus on repeat for a good five or six hours -- it's just that good, and what more could you want from a guitar-pop record? Like an ideal piece of chewing gum, the set stays fresh and flavorful for hours on end, and we look forward to hearing more from these pop savants. Buy Chorus from Slumberland right here.

Dark, beautiful and majestic, Soccer Mom's long-anticipated self-titled debut arrived and burned brightly, but the combustion was apparently too much for the act, which by the end of the summer had already announced that it was decommissioning the battle station and going into mothballs. Five-year-old Soccer Mom's record reigned in the band's overwhelming live sound, and in doing so illuminated the elegance, passion and pathos that make its songs so powerful. We highly recommend picking up the vinyl of this one, as finally hearing it on a proper turntable after listening to digital files and early mixes for about a year revealed a low-end punch we had not previously appreciated. Soccer Mom is a huge record, and sadly, is also now a monumental reminder. Will Scales and Dan Parlin recently announced they have formed a new act called Gold Muse with Young Adults' Chris Villon, Earthquake Party!'s Justin Lally and musical journeywoman Deb Warfield, and we are very excited about the possibilities there. Buy Soccer Mom -- which we premiered here in April -- from 100m Records right here.

Sam Cook-Parrott's facility crafting catchy indie pop approaches awe-inspiring, and -- as good as Radiator Hospital's sophomore LP Torch Songs was -- there were signs that his estimable talents were seeping into more experimental territory. But his proverbial bread and butter, hook-laden power-pop anthems and poignant downer ballads, were still well-represented. The prolific songwriter's scrappy, fizzing anthems brim with emotion on this distinctly summery record. Staff Writer Dillon Riley reviewed Radiator Hospital's Torch Songs here in July. Stream the set via the embed below, and purchase it from Salinas right here.