That Was The Show That Was: Big Ups with Krill, Washer, Kal Marks | O’Brien’s Pub | Dec 3 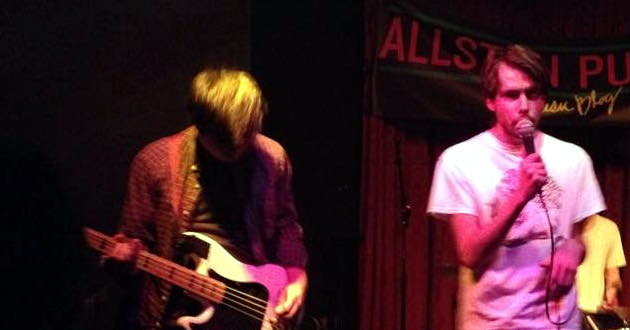 [PHOTO: Big Ups by Dillon Riley] Even in a year brimming with killer split single releases, the Big Ups/Washer 7" from last month looms very large. Big Ups' side of said media is particularly hot, the sound of an act embossing an exclamation point on a breakout year. The New York band's debut LP Eighteen Hours Of Static, issued by Dead Labor/Tough Love at the beginning of 2014, was a howling mass of seething post-hardcore rage that drew wide-eyed attention from Clicky Clicky HQ. But for whatever reason the act doesn't frequent these parts often, so last week we dropped our pencils and vintage X-Puck 'zines to take in Big Ups' outsized rock sounds at O'Brien's in Allston Rock City.

As a frontman, Big Ups' Joe Galarraga cuts a particularly compelling figure. He preens and struts in the manner of Jagger, and is prone to wrapping the mic cord around his neck during instrumental bits like Iggy. He wields a remarkably emotive voice, one as likely to deliver low, gravelly tones as it is lacerating screams; Big Ups' best tunes utilize both. Its side of the aforementioned 7" was aired during the act's set that Friday night, as well as a particularly brutal take on "Justice" from Eighteen Hours Of Static [link], and a few tunes teasing a likely forthcoming record were especially engaging. One of these newer jams illuminated a looser end of the band's sound, unwinding its focused attack a touch while incorporating nifty slide guitar.

Big Ups' strong set was but one highlight of the evening's absurdly stacked bill. Boston downercore heavyweights Kal Marks opened the night, proffering a few numbers from its own recently released Just A Lonely Fart EP, along with a steady helping of of songs from their still-stirring Life Is Murder long-player. Kal Marks have graced these electronic pages many times, and deservedly so. The act's sludge-y channeling of America indie when experienced in the figurative flesh makes for a particularly visceral experience, felt in the body via the sympathetic nervous system as much as it is down in the ear canals. Last week's set -- and the subsequent release show that transpired at a Lower Allston house over the weekend -- were among the best we've witnessed from the trio. It's new songs hit hard, and the band clearly is cresting a big wave as artists at the moment.

Boston bugcore titans Krill headlined. As is now public information, the act's new record A Distant Fist Unclenching [boing] will be released in February on Exploding In Sound. We've seen at least half the record performed live over the last six months or so, and, of course, the act purportedly played the thing front-to-back in August on Boston's fabled Pipeline live, local radio show -- but even so, we are totally stoked to hear the recorded realization of these tunes. The release of a new Krill record is an event the likes of which our (sub-)culture seems to not celebrate as much as in years past. In the meantime and here and now, Krill the live band is just as potent as ever, with regular moments of transcendence. Fronter Jonah Furman sheepishly copped to last week's show being their first in a month, a long gap for a band as active as Krill, but there were no figurative cobwebs to perceive. Dipping into more than a few numbers from Lucky Leaves [review] -- a relatively rare treat in light of the band's more recent setlists -- as well as some previews from the forthcoming Fist, Krill continues to prove to be the jewel of Boston's exceeding excellent music scene.

New York post-punkers Washer performed second, and the set featured an iteration of the previously mentioned split's tune "Rot," which is the duo's finest work to date. As a live entity, Washer present a convincing tossed-off charm, with occasional notes flubbed and between-song banter brief and often bitingly funny. They are indeed an excellent addition to the ever-growing Exploding In Sound family, to whom we wish, in the spirit of the season, much continued health and success. -- Dillon Riley