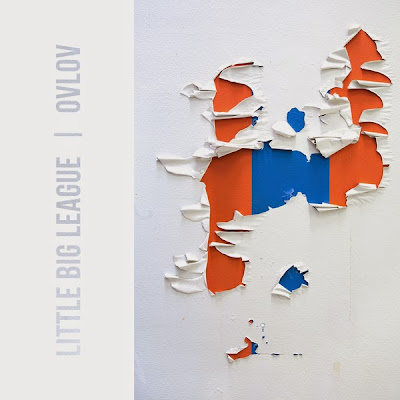 The venerable Tiny Engines label will release in August a split 7" featuring tremendous tunes from Philly indie-rock dynamos Little Big League and Connecticut fuzzmasters Ovlov. Two-thirds of the record has been in the wild for some time, in the form of advance streams of Little Big League's "Year Of The Sunhouse" and Ovlov's possibly career-defining tune "The Great Crocodile," and just today the final piece of the aural puzzle was revealed. We feel pretty comfortable saying that if you buy just one split single this year (which would be weird, but let's not make this about us...), this is the one.

With "Year of The Sunhouse," fronter Michelle Zauner and co. channel the electrifying sprawl of the foursome's terrific 2013 long-player These Are Good People, whilst simultaneously tightening the space surrounding the act's dueling guitars. Essentially the tune delivers 2:10 of unmitigated hook, and -- despite that fidelity to and focus on the said hook -- "Year Of The Sunhouse" is perhaps their most expressive track to date. The song gives voice to Ms. Zauner's convictions about her future and contrasts them against the apprehension of those around her. Just today LBL premiered its second tune from this doozy of a release, "Pure Bliss Choices," over on Wondering Sound. The slightly longer workout boasts the same cutting guitar work and evocative imagery upon which the band has built its reputation. The song's double-barreled chorus delivers ringing distortion alongside a wholly arresting vocal melody.

Ovlov's side, "The Great Crocodile," plays out like a response to its titanic full-length am's finale "The Great Alligator." It is a towering, six-minute tour de force, rife with riffage seemingly cloned from the classic Dinosaur Jr. release You're Living All Over Me, with chugging rhythms courtesy of Ovlov's current all-Hartlett-all-the-time back line. The recording is the first to feature the relatively recent 'lov addition, second guitarist Morgan Luzzi, who has been performing with the Hartletts of late. Of all the Exploding In Sound bands, Ovlov has always seemed most suited to emo comparisons, so its pairing on the split platter with LBL makes a lot of sense. The Nutmeg staters make further inroads into that scene this summer, as future dates include shows with Topshelf's Donovan Wolfington and Run For Cover's (recently reactivated) Basement (that's a house show in JP and opening slot at the Sinclair, respectively). "Year Of The Sunhouse" and "Pure Bliss Choices" b/w "Year Of The Crocodile" is available for pre-order now in a limited edition of 1,000 flat vinyl circles with a groove cut in each side. The pressing includes 125 opaque bright orange singles, 225 opaque bright yellow singles, 300 translucent peach singles, and 350 boring old white singles [completists can get all four for $20 but, really, will four copies of the same single really fill that void in your life? -- Ed.]. Pre-order yours from Tiny Engines right here before they disappear. We last wrote about Little Big League here in November, when the quartet played a hot and local show with Paws and Idiot Genes. More recently, Zauner released under the moniker Japanese Breakfast a collection of seven solo tracks written as part of a blog exercises; check out the excellent Where Is My Great Big Feeling right here. -- Dillon Riley