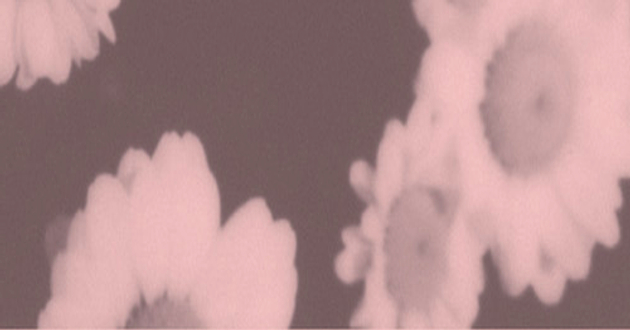 >> We have not yet familiarized ourselves with the ample back catalog (it stretches back to 1999) of the perfectly monikered, Lansing, Mich.-based ambient drone outfit Auburn Lull. But if the magnificence of the quintet's latest cassette is any indication, such an exploration will be well worth the time. New release Hiber is the act's first in six years and it is out now on the immaculately conceived Geographic Northern label -- whose products are as gorgeous and special on the outside as the sounds contained therein. And praise be to Eno, what sounds they are! Hiber contains five mostly instrumental tracks (a Will-o'-the-wisp female vocal occasionally appears), two of which are shorter pieces that bridge between three protracted drone suites. Opener "Moterm" melds guitars and synths into the round, sustained tones of a woodblock, mapping the general approach of Hiber as impressively calibrated guitar pedals create masterful texture, depth and space in refreshing ways with each new song. The opener leads into "CA1," wherein a gentle, alien motif iterates across a bed of icy, echoed guitar leads and warm hums. The track evokes the delicate silence of a winter's first snow, gentle reflections of a crisp, sunny day, or caverns of warmth in a freshly made bed. Later, the title track introduces a screwy piano to the mix, unfolding a complicated pattern of single left-hand notes that arguably resemble some section of a solo rendition of a Debussy number -- if ole' Claude had been a shoegazer. Auburn Lull save the best for last, as "Static Partition" makes for fascinating, stereo-panned ear candy. Bizarre, tremolo effects pitch over backwards while a bright, siren-like lead dances between the strange rhythms. White noises and found sounds creep in through the gaps and valleys of the arrangement -- specks of detail that come and go as each song awakens, breathes, and dies. You can hear the entire new collection via the Soundcloud embed below. Buy the tape, limited to 100 copies encased in blueberry-colored plastic, from Geographic North right here. -- Edward Charlton

>> From the same Bard College house show circuit that likely birthed the terrifically original lo-fi rock of the repeatedly Clicky'd Palberta come cohorts Jawbreaker Reunion, whose latest release recently found its way to our inbox. The awesomely titled Lutheran Sisterhood Gun Club materialized in late May as a pay-what-you-like download at Bandcamp, and it is filled with warm, surfy, girl-group-referencing rock. It brims with memorable melodies, especially in the vocals of co-fronting Jawbreaker, Lily. Her lyrics regularly focus on humorous and awkward moments of collegiate life, as in party stompers like "Jeggings," "Bear and Loathing," "Straightedge Revenge" and "Friends Theme Song." Every member of the band contributes to songwriting, and each of the aforementioned tunes perfectly pairs carefree instrumentation with snarky lines that must work wonders during a dimly lit house show. It's when the band looks beyond goofball antics, though, that a certain bruised emotional core reveals itself. Album highlight "E.M.O." in particular is terrifically affecting, with innocent, verses transitioning to a great, high-hat filled chorus. The spiraling lead guitars and haunting lyric "I don't want to wait anymore" elevates the band from a fun, party-rocking concern to an act whose melodies melt hearts. As with aforementioned peers Palberta, there is just the right amount of recklessness to Jawbreaker Reunion's tunes to lend a bit of crackling chaos to their characteristically straightforward pop structures. It's the sum of all of that -- the chaos, the accessible emotional payload, the sheer youthful fun of it all -- that ultimately distinguishes Lutheran Sisterhood Gun Club and makes it something you will press play on over and over again. Listen to the entire set via the Bandcamp embed below. -- Edward Charlton

>> Shelflife Records will release July 8 Valley Stream, New York indie-pop outfit Gingerlys' debut EP, Jumprope, which features four perfectly realized, fizzy strummers. The opening title track lays the foundation for the entire short programme, but the EP really takes flight during its second song, the beautiful, uptempo "Summer Cramps," which echoes wonderfully the detached dreaminess of Chapterhouse's legendary 1991 album opener "Breather." Gingerlys' high-pitched, simple synth lines run over top electric and acoustic guitars while dynamic drumming steadily pushes the buoyant jangle to the edge of panic. Maria Garnica's lead vocals provide a catchy, sultry counterpoint to the relatively clean-cut, conventional instrumentation. Often, her wordless oohs and ahs are the best hooks on the disc, and they are the source of so much of what lends the quintet's tunes a sensual dimension. Her ever-present pillowy synth lines anchor the songs, and remind this reviewer of The Wake's epic 1985 album Here Comes Everybody. Closer "Set You Off" increases the guitar interplay with colorful, chorused leads, and emphasize the dual vocals of Garnica and songwriter Matt Richards, as well, imbuing the proceedings with even more of a C86-revival feel. Fans of The Pains of Being Pure at Heart or Minks take note! Consider grabbing for this great introduction to Gingerlys instead; Jumprope is available in a limited edition of 300 vinyl singles and as a digital download. Pre-order the EP from Shelflife right here and stream it via the Soundcloud embed below. -- Edward Charlton

>> "What's that sound? Boredom!" So goes the refrain of "What's That Sound?," the electrifying debut single from Hard Left, a Slumberland Records supergroup featuring members of Boyracer, Manatee and #1 Smash Hits. The recording sounds as fun as it must have been for this group to conceive. The single, released through the label's Soundcloud account and embedded for your consideration below, is a wonderful throwback to primo early punk, with growled backing vocals a la Gang Of Four, and three chords wrapped in just the right amount of vintage fuzz tone. The band inhabits the retro sound, and leverages its bombast to carry youthful and vibrant political messages to an indie rock community that (in our opinion) collectively could use a lesson in the importance -- nay, necessity -- of protest and politics in music. That said, it's a touch funny to hear these folks in a band like this, as in their youth certain of them were busy providing an alternative to this type of music within the Washington, D.C. -area. But desperate times call for desperate measures, right? Let's hope there is more like this coming, both from Hard Left and others, because -- as the band reminds us -- "Suck-cess is not far away!" Listen via the Soundcloud embed below. -- Edward Charlton

Great stuff, though some quick corrections for your bit on Jawbreaker Reunion: everyone in the band writes the music, and both Lily and Bella sing lead vocals for different songs. Also that isn't a banjo in "EMO".

AND YOUR MY FACT-CHECKIN' COUS... Sorry to just be seeing this, we'll make the appropriate edits soon. JCB