Today's Hotness: You're Jovian, My Psychoanalyst 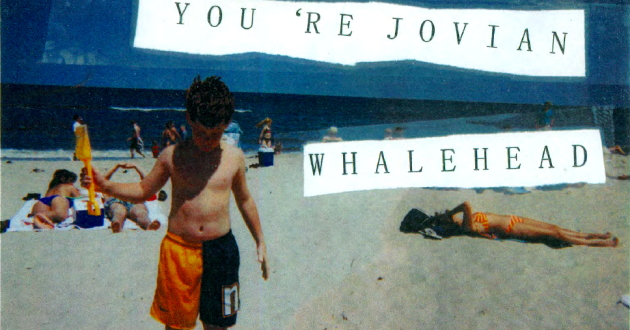 >> It's been quite some time since we've heard new things from Virginia Beach-based dream-pop savant Elliot Malvas, who creates sublime music under the moniker You're Jovian. And so we were quite excited to receive an email last week with information about the new tune "Whalehead," which we are premiering here tonight and which you can stream via the Soundcloud embed below. The song is layered with guitars that shimmer and bend around Mr. Malvas' gentle vocals. Once "Whalehead" finds its rhythmic footing, after about a minute of atmospheric build-up, its measured strumming and understated singing call to mind the finest moments in the Swirlies catalog, or -- given its insistent rhythm -- perhaps even a heavily psychedelic take on the music of Versus. "Whalehead" turns on the tension between Malvas' opaque, tight strums and his spectral voocals; it's certainly a very listenable number and hopefully it is also a harbinger of increased activity from You're Jovian. Malvas tells us he will be out performing solo gigs this summer, but this will not be a guy-with-guitar thing. Instead, Malvas has recorded the bass and guitar parts of the songs in his set in single takes, and he plays those back on stage through bass and guitar amps respectively while playing the drums live and singing. Which sounds pretty damn compelling. If you can't get enough of that You're Jovian stuff, Fun/Not Fun records released this past spring a cassette and digital download imaginatively titled Demos. It appears the cassette was issued in an edition of 25 pieces, but there is nothing at the Fun/Not Fun page indicating the cassette is sold out, so perhaps you can still snag one right here (where you can also stream the fine tune "Share Yer Moon" via an embed). There is some talk of an east coast tour this fall for You're Jovian, so if you are good little girls and boys Malvas may come right to your town (especially if you book him, hint, hint). We previously wrote about the band in mid-2012 right here.

>> There's a span of years in one's life during which summer feels infinite. That feeling, of course, ceases, and that's among the bummers of real life (trust us, kids, one day you'll be old like your trusty executive editor...). But a new full-length from Derby, England's cinematic dream-gazers My Psychoanalyst practically bursts with that feeling. Which is somewhat amazing, as the sort of fertile optimism its presence here implies is something one would associate with a greener band. But My Psych, as fans are wont to call them, are a seasoned quartet a decade old. Its sparkling new and self-released collection Choreomania has been in the can for at least a year, and previously went by the decidedly un-optimistic name Don't Try (and, since you didn't ask, an equally appropriate yet Pavement-referencing title would be Watery, Majestic). Choreomania, seemingly so named for literal dance crazes that transpired in the middle ages, can be gentle ("So Much Stuff," which touts heavenly "ahhhhhhhs" and is like the second coming... of Chapterhouse), majestic ("Lobadibin," which faintly echoes The Fixx's classic "Stand Or Fall") and even aggressive ("Fist Of Herring IV"). Often it is all of these things at once, as is "Clump Soul," which was issued as a digital single a year ago. My Psychoanalyst's Choreomania takes a marked turn toward harder-edged sounds in its final third. This doesn't make the set disjointed, however; instead, it gives the proceedings a narrative feel, like it is heading toward something. Listeners, however, are never quite delivered to a final destination, as closer "Admission" stretches into the aforementioned infinity for a solid and beautiful eight minutes, perhaps returning listeners to the dream-state or fugue-state that enveloped My Psych in the four years between last year's digital single and 2009's Piecemeal & Envy. Whatever it does, "Admission" has become one of our favorite tracks of the year. Choreomania was released today and it is a tremendous record; calling it a return to form misses the mark, as we're fairly certain it is the band's best record to date. Stream the entire full-length via the embed below, and click through to download the release, which is priced at paywhutchyalike. We last wrote about My Psychoanalyst seven years ago, right here.

Email ThisBlogThis!Share to TwitterShare to FacebookShare to Pinterest
Labels: Chapterhouse, My Psychoanalyst, Swirlies, The Fixx, Versus, You're Jovian